Okay. It's been more than 24 hours since the last rifle report echoed off the range. Guns have been brought home, cleaned, and tucked back in their respective safes. It's time to dust off the keyboard and write down my thoughts on the Bloggershoot.

And, of course, yours truly: 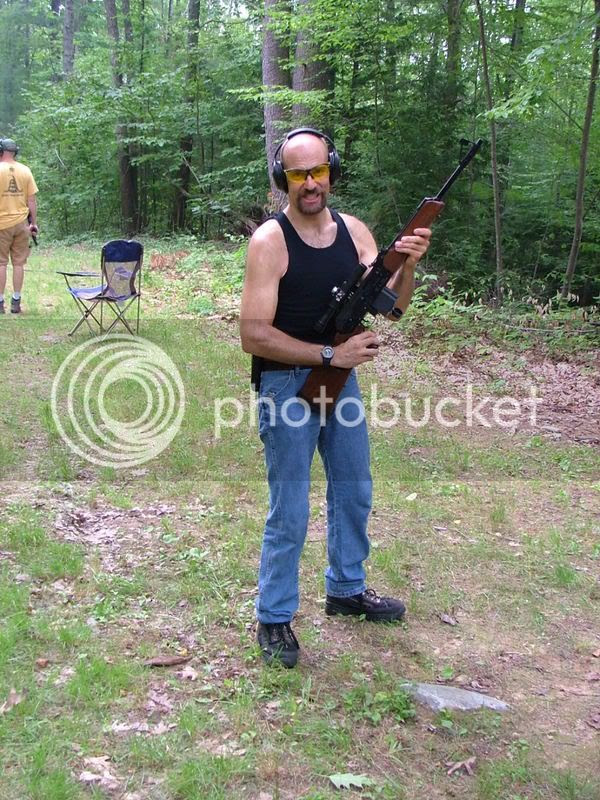 (This pic was taken in the spirit of "Let's make Sarah Brady cry", because as Lissa put it, "Every time Sarah Brady cries, an angel gets its wings." I like her.)


I'm not sure exactly who does or doesn't mind having their picture plastered all over Al Gore's Intertubes, so I'll just post a quick pic of the ordnance: 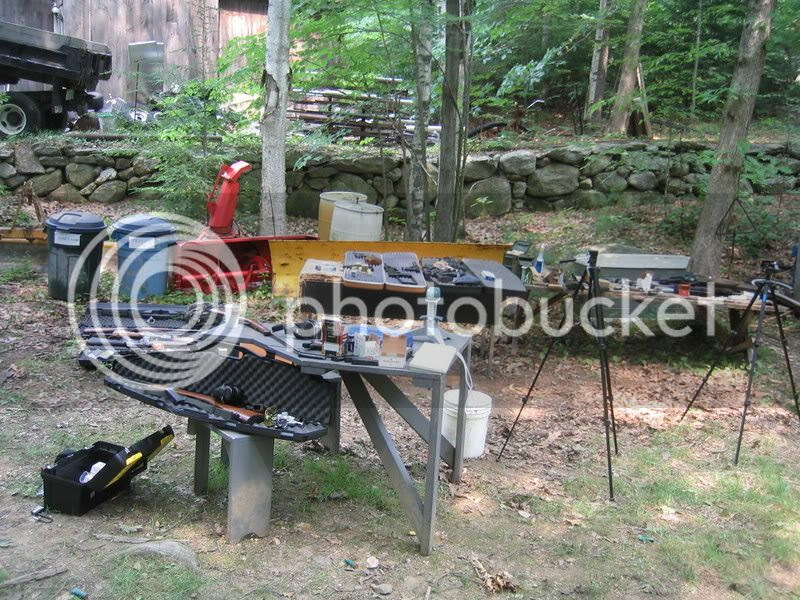 And that's only one side of the range. The other side held more armaments, but I neglected to get a shot of that side (mainly because it was my stuff primarily).

We had pretty much everything possible under the gunnie sun short of a .50 BMG. There were submachine guns. There were suppressed M4s. We had military surplus weapons spanning the advent of smokeless powder. Evil black rifles were aplenty, with AK-47 clones, AR-15-based platforms, and even my .308 VEPR (which, while not black, is certain to give gun grabbers a nasty case of the vapors...).

For pistols, I made an interesting observation: With more than a dozen gunnies in attendance, there was not a single Glock to be found. I counted at least four or five 1911s, and more Smith & Wesson revolvers than you'd be likely to find in the average gun shop (and that was just TOTWTYTR's stash!), but nothing from Gaston...

And the cannon. We had a cannon to start the festivities.

And I got to light it. I'm still geeking out about that...


Since I was responsible for organizing this get-together, I took on the role of the unofficial emcee, range officer, and general cat-herder for the group. I didn't get a chance to take as many pictures as I would have liked - I got home, looked at my camera, and went, "Shit, is that all the pictures I took???".

I really wish I could have spent more time just chatting with everyone. Between running around setting things up, giving range warnings (range hot/range cold, man downrange, etc.), and trying to get some shootin' time of my own in, I didn't get nearly enough chance to talk to everyone. Nevertheless, here's my take on things...

Marko is a lot taller than I imagined; I think it has to do with the psychology of "Munchkin" in his blog title. He's soft-spoken, extremely nice, but when he gets a firearm in his hands he is all business.

Ted surprised the hell out of me by telling me I was his inspiration to start blogging. It took me aback, a little, to find out that the virtual poo I fling around with abandon here actually motivated someone else to share their thoughts. That surprised me. He also brought the workstations that we shot the hell out of, which was pretty fuckin' cool...

Lissa is just cute as a button and an absolute sweetheart. She openly admitted to being pretty new to firearms, and came to the group with an open mind and a willingness to shoot pretty much anything we handed to her. She really looked like she had a good time, which, really, is all I ever wanted from this get-together. And she made this picture possible: 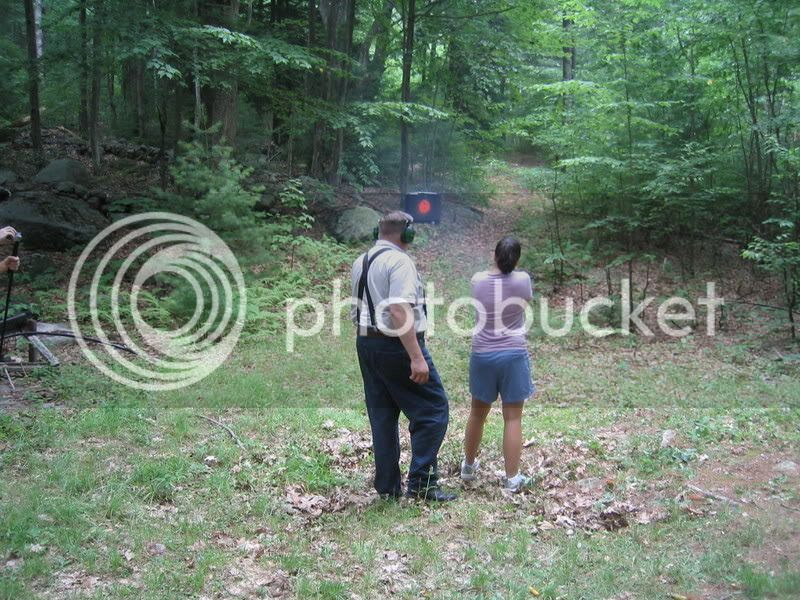 Now if *THAT* doesn't get several dozen angels their wings, nothing will. That's Lissa, a female Massachusetts resident, shooting a machine gun. Heh.

Liberty brought a Furby. That says it all right there, pretty much. *g* Liberty's one of the folks I wished I could have chatted with more, being as how he came down pretty much from the Arctic Circle to join us... (inside joke).

JD brought LaLa, the brutal assault of which has been captured on video. If that's too gruesome, here's the before picture: 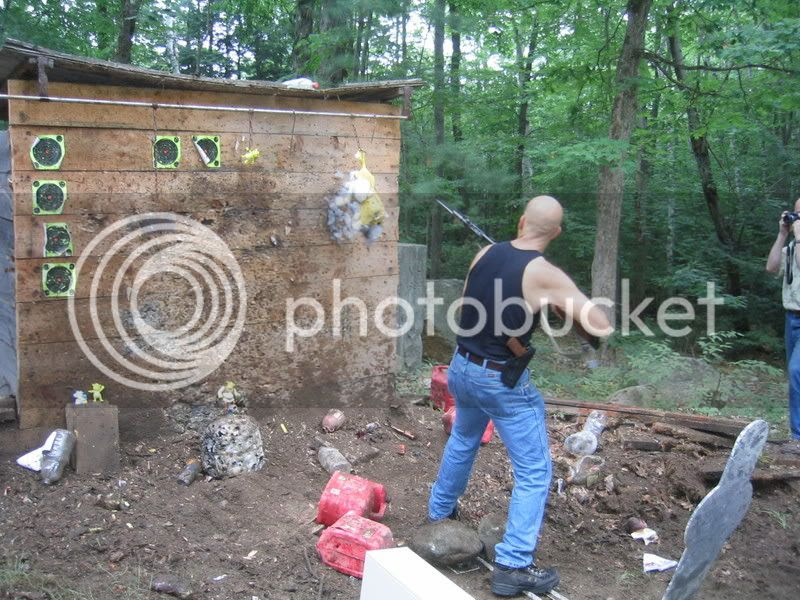 Weer'd Beard was my co-pilot for the ride down, and we got to jawin' and such and totally missed the exit off the highway... It took us like three or four exits before we'd realized we'd gone too far and turned around - resulting in us showing up about 10 minutes after the Bloggershoot was supposed to start. We weren't the last ones there, but I had wanted to get there early to help set up... Oh well. We were the last ones to leave, though...

I've known Bruce for years - hell, I knew him before he owned guns! TOTWTYTR I first met a couple years back when we did the Smith & Wesson tour. We've also cruised a gun show or two together.

Have to save doubletrouble for the anchor position. I owe you one, buddy. Actually, I owe you more than one for the generosity you displayed in opening your lovely home and fabulous range to a group of weirdos strangers. This meeting would not have been the same anywhere else - it definitely wouldn't have been as much fun. Your range allowed for a more casual atmosphere on the shooting line (although we all obeyed the Four Rules, of course, and everyone came away with the same number of holes in their bodies that they came in with).

And we got to shoot Furby, LaLa, and computer mainframes. Try THAT at the local Fish & Game!

Thanks again for everything.

For commenters, I had met zeeke42 at the Northeastshooters pumpkin shoot last November, and brad_in_ma has been a friend for years. Arcticelf I hadn't met before, and was kind enough to offer his range in central MA for future meets. I think he was afraid of losing the oil pan on his sports car on the ride to the sooper seekrit range again... drmac and his wife are two more folks that made a long trek to be with the group, and I really wish I could have spent more time chatting. It was great meeting all of you, and here's hoping that there are many more of these meet-and-greets in the future!

Thanks again for setting things up JayG

I fear I can't take credit for LaLa though I did my part to make Sara cry bringing an AR and AK . . . .

Jay, actually I brought LaLa. It belonged to #1 son, back when he was oh I don't know, 4 years old or something.

Jay,
It was the muffler and cat, neither of which are required in my mind :)

Thanks again for organizing.