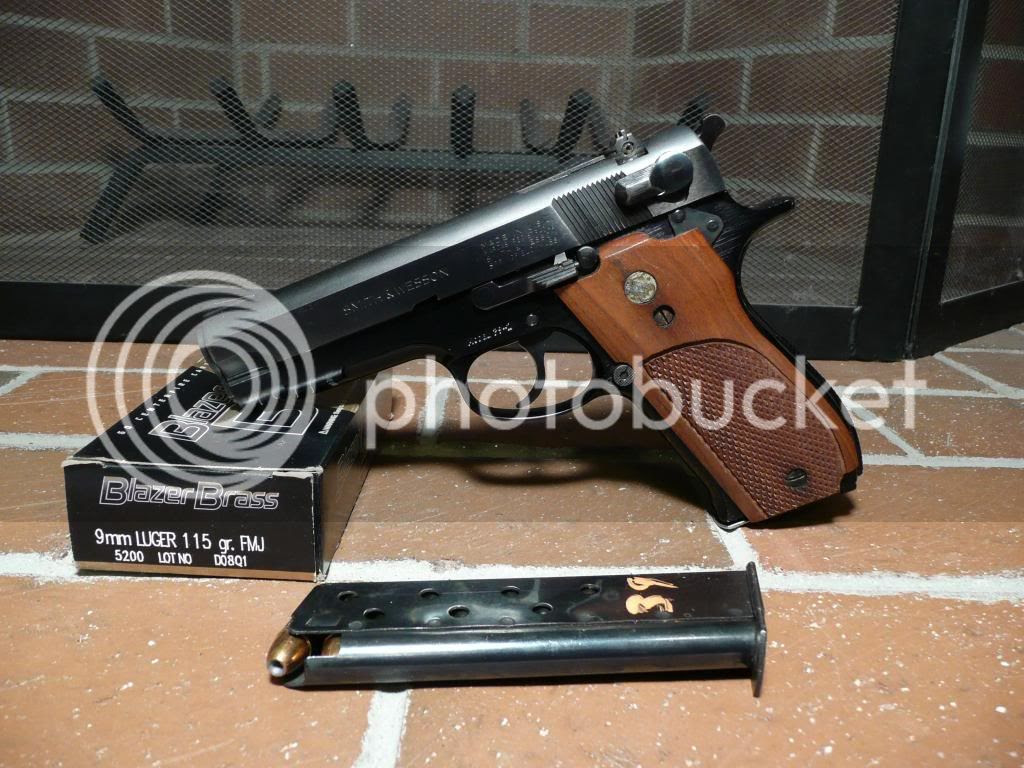 The model 39 was introduced in 1955, some six years in development bringing it to market. It was the first American double-action semi-automatic pistol, using a modified Browning Hi-Power locking principle. It's a single-stack (8 round capacity) recoil-operated, locked breech all-steel auto-chucker; the double-stack version (model 59) would appear some 15 years later.

This particular model belongs to Dad G.; he dusts it off twice a year for his quals (LEOSA and also NH PI) and scores Expert Marksman every time (apparently the shooting skills skip a generation or two in the G. family; I'm hoping this means TheBoy is a natural). Brought it along on the range trip with Lissa a couple weeks back and was positively amazed at how easily it broke orange clays at the 25 yard berm.

One could do a lot worse than one of these fine pistols, that's for certain.

The nice thing is they are still reasonably priced and available. I bought an older one, new in the box 39 for a very good price. What year was your Dad's made?

I am purely tickled you're getting so much blog fodder out of our range trip! Yay!!

And they put a Mag Disconnect on it!

I have the third generation version, the 3914. It points and shoots tremendously. I was using it's bigger brother, the 5906 at the Northeast Bloggershoot and someone remarked how I was hitting whatever it was I aimed at. That's a tribute to the gun, not the gunner. And to be complete, I have the 6906, which is also a great shooting carry weapon.

Lissa, if and when you decide to carry for self defense the 3914 or 3913 Ladysmith weapons are good candidates. They are a bit lighter than the 39, because they use an alloy frame, not a steel one. Other than that, they are very similar.

"Bloggershoot and someone remarked how I was hitting whatever it was I aimed at. That's a tribute to the gun, not the gunner."

That was Lyssa and I. and I think you deserve at least SOME credit!

Maybe Weer'd, but even a blind squirrel finds and acorn now and then! ;)

Late to the party but just a note of interest. My Dash2 is an alloy frame. It is comfortable to carry, to the tune of about 1.5 pounds lighter than the BEagle, and recoil isn't much snappier. My only problem is finding mags.

I would like to have one, looks so easy to manipulate... by the way, what a great post dude, and this blog can help a lot of crazy people as me, to pick one gun.