With All Due Respect...

You mess with the Killdozer, you get the horns...

(CNN) -- A former Israeli soldier is expected to testify Thursday in a civil suit filed by the parents of an American peace activist, who was crushed to death in 2003 by a bulldozer as she tried to prevent Israel from bulldozing homes in Gaza.

The soldier -- the one driving the vehicle when Rachel Corrie, 23, was run over -- will testify from behind a screen to protect his identity. The Israeli Supreme Court upheld the decision to shield him.

I honestly can't think of anything to say here that won't come across as black-hearted and mean. So I'll just speak my mind then... Rachel Corrie played a very expensive game of "Chicken" which she lost and paid with her life. She injected herself into an ageless battle between two groups that have never, do not, and will never see eye-to-eye, and she allowed herself to get caught up in the romanticism of the supposed victim. She willingly chose to use herself as a human shield, and wound up crushed under an armored bulldozer for choosing improperly to block it with her own body.

Whether the soldier knew she was there or not is immaterial; she willfully put herself in danger akin to the folks that run with the bulls in Pamplona. She relied on the operator of the bulldozer not only being able to see her, but also to want to stop before hitting her - and being able to stop before hitting her. It's doubtful the soldier intentionally ran her over - we humans have a natural aversion to killing our own kind for the most part - it's more likely that he never saw her to begin with (considering that she was behind a mound of dirt).

And, lastly, it gives me a reason to post a gratuitous picture of KILLDOZER: 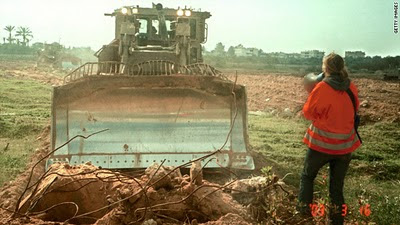 (pic from CNN article)
Like the man said in "Men in Black": If you don't start none, there won't be none.

And my school just put on a play which celebrated her efforts over there. Didn't see it myself, because according to what I read and what my friends told me, it... wait for it... portrayed Hamas as being a group of kind, innocent people who only wanted peace, and the Israelis as sadistic, brutal, eeeeeeevil thugs.

One more dead commie/lefy. Who cares, beside others of the same inclination?

Her fault. Hope the case is over soon so the poor driver can move on.

Her parents have searched for answers in their daughter's killing. Was it intentional? Who was accountable? On Thursday, they finally heard from the man who was responsible.

Accountable? Responsible? Rachel Corrie was responsible and accountable, not the operator of the bulldozer, Caterpillar, who her family also tried to sue, not the Israeli government.

I expect that the jury will agree.

Reminds me of the moron in California who was surprised when a weapons train ran his legs over rather than stop in an unsecured area.

Reaping what you sow.

Anyone else get an unexpected craving for IHOP?

Here we call her St. Corrie of IHOP.

I do it by getting pancakes at the diner and driving a Cat powered truck :-P

The real question here, is how do we get the rest of her ilk to dive under heavy equipment??

She wanted to be a shield, she became a shield, and as any quick look in a museum of ancient and medieval weapons will show, sometimes shields must absorb blows from weapons and suffer damage.
Mom and Dad, I'm sorry your daughter is dead, but she made the decision to become a shield, and not all shields return from war unscathed.