I Am The Only One Professional Enough...

...to leave a semiautomatic rifle sitting on the trunk of my police cruiser... 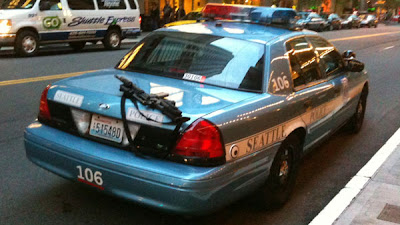 Skidmark sends in this story to go with the picture:

SEATTLE — The Seattle Police Department is apologizing for an assault rifle left unattended on the back of a patrol car Monday night, and has launched an investigation into the matter.

First published by The Stranger, Nick Gonzales snapped a picture last night of the menacing-looking rifle on the trunk of a Seattle Police car. It was around 9 p.m. and the car was parked outside the Roosevelt Hotel, near Pine and 7th Avenue, with no police officers in sight, said Gonzales.

Gonzales is lucky as hell the Seattle PD didn't arrest him for daring to take a picture of a police vehicle...

I don't know what Washington's laws are regarding safe storage, but I can guarantee two things if that had happened in Massachusetts (which does require that firearms be locked up or have trigger locks):

1. If it were me, I would lose my LTC and most likely be charged with a crime; and
2. If it were a MA cop, the same thing would happen to him as will happen to that Seattle cop: nothing.

I especially like how he drove off with the rifle still on the trunk. At some point, the rifle was removed from wherever it was the PD stores them while in transport - I would guess/hope they have a case or holder of some sort in the trunk. It was then taken out and put aside, and then placed on the trunk - and immediately forgotten. The cop was so distracted he didn't notice a friggin' rifle sitting on the trunk of his car. That's scary right there.

What's especially funny - in the sickeningly ironic sense - is that if a random cop happened upon a random car in a parking lot with a rifle sitting on it, chances are pretty high that the owner of that rifle would be in a world of hurt. I'm torn over whether that's a good thing or not - I consider it very much like a car with the doors unlocked and the engine running. While we should, in a perfect world, be able to do that, the world is in fact imperfect. I'm not saying it should be a felony, but it should at least be a ticketable offense - do something that stupid, you deserve to pay for it.

The good part about this story, though, is that no one got hurt and I guarantee you that officer is NEVER going to live this down...

Labels: Only Ones, Striking Stupidity

Nope, not buying the story.

Everybody knows that evil black assault weapons turn everyone near them into blood crazed murderers. If things had happened like the story said some innocent minority youth on his way to bible study would have been compelled to grab the rifle and assist it in mowing down a bus load of grandmothers on their way to bingo, a group of children, and a puppy.

It couldn't possibly have sat, completely unmolested, while pictures were taken without taking control of some poor souls mind for it's own nefarious reasons.


Oh, and that cop needs a public shaming. And a smack upside the head.

Actually, to make matters worse, someone else drove off with it. That officer is being "investigated" as well for failure to inspect the vehicle before driving.

I just wonder what would have happened if it had fallen off the trunk into the street.

"At some point, the rifle was removed from wherever it was the PD stores them while in transport"

This leads to be most embarassing/frightening part of the story.

At some point, the cop went into a situation which, in his "professional" judgment, justified the use of a rifle. (Cops may normally have _access_ to rifles, but they don't remove them from storage unless they expect to need them.) Then he put the rifle down and forgot about it.

Which means, to me, that his judgment is so impaired that he's pulling out rifles in situations so trivial that he's capable of forgetting about them in the time it takes to get back into the car.

I'm in favor, in principle, of everyone who wants a gun having the legal right to get one. But folks like this dude are on my list of people who _shouldn't_ have guns.

I had the same issue with some guys I knew in the Army. A tube of crazy glue applied to the palms of their hands and the pistol grip of their M-16 fixed that right up.

If you don't want to be that harsh, undo one end of the sling and tie it around his wrist for a few days.

But But But I really had to pee bad.

I'd have scarfed the bolt and mailed it to the police chief or mayor. Just to see who's paying attention.

Looking at the rifle, I'll bet it's got some expensive optics.

Imagine that cop trying to explain the lost of an Aimpont or EOTech...

Whip out your trusty multi tool and reduce the rifleto it's component parts.

Re-assembling his patrol carbine from nothing might serve as a good lesson.

According to further reports, one officer was cleaning out the trunk of his patrol car in a secure garage. He removed the rifle, setting it on the trunk of an adjacent vehicle. He then proceeded to carry a box and bag of trash to the dumpster leaving the rifle on the other cruiser. Another officer came out, got into the other cruiser and drove away.

I'm suspiscious of this story. I don't see how you could drive more than a few feet before the gun slid off.