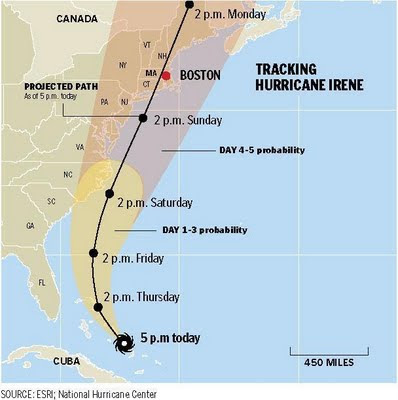 Hurricane Irene could sweep ashore in New England this weekend, dousing the state with torrential rains, and lashing it with damaging wind gusts, while heavy surf pounds the coasts and water rises in streams. But it’s still “highly uncertain” exactly where and how hard the storm will hit, National Weather Service forecasters said this morning.

Country music star Kenny Chesney isn’t taking any chances. Promoters today announced they are rescheduling his Gillette Stadium concert. The Foxborough event will be held this Friday, instead of Sunday as originally planned, according to a statement posted on Chesney’s website.


Oh yeah. The local news is going absolutely batshit insane over hurricane Irene. This has all the drama and fury of a Nor'easter snowstorm, coupled with the possibility of this being the biggest hurricane to hit New England in over 80 years. Naturally, it's being hyped endlessly as "ZOMG KILLER DEATH HURRICANE WILL LAY WASTE TO ALL OF NORTHERN HEMISPHERE ZOMG!!!!11111oneoneone". I'm surprised there aren't angry mobs storming the Boston weather bureau right now demanding that they stop the hurricane in its tracks.

Of course, this brings to mind the age-old question: Bug in, or bug out? Personally, I've lived through a bunch of "hurricanes" in New England, and basically the sea water's just too cold for hurricanes to last long. Gloria back in 1986; Bob in 1991; even Hugo was supposed to wallop us good, and none of them amounted to much more than just an extra-wet summer storm. Even the meteorologists are hedging their bets, with lots of "it depends" and "storm track" and other weasel words like they throw in when they're predicting eleventy billion feet of snow and we get a dusting...

It's a good idea, though, to take a few common sense precautions just in case. I'll freeze up a half-dozen ice blocks in the big freezer downstairs (grab a plastic storage bucket; fill ~ 3/4 to top, put in freezer. Blocks last longer than cubes) in case we lose power - we can consolidate all the frozen food in the freezer downstairs and use coolers for the refrigerated stuff. Bring out the candles and flashlights; make sure there's batteries for everything that runs on 'em. Test the sump pump and make sure it's working properly; other than that, there's little to do ahead of the storm other than to keep a clear head and take a few basic precautions.

It's pure luck, mind you, that I still have several dozen loaded AR magazines from the Northeast Bloggershoot... ;)

Current storm track shows it passing right over my head, AND I'm on the coast. Fortunately my shack is on high ground, or at least was passes for high ground when you live at sea-level. I'm at about 35ft, and I think the largest recorded storm surge here has been 30ft. So I'm bugging in. Worst case is I'm an island for a a day, that's not such a bad thing :)

Jay;
You can fill up your bathtub with water for flushing your toilets, make sure your gas grill's tank is full, fill up your cars / trucks. Assume you will lose water, electric and city gas. (uprooted trees damage pipelines)Close, lock & support your garage door in any way you can. (garage door failure to wind, causes most homes to lose their roof)
Assume that most folks will be totally unprepared / poorly prepared & EXPECT that you or those that are prepared to "help" them, & be displeased if you cannot or will not.
Expect a breakdown of emergency services & communication. Cash is king when electronics for credit / ATM cards don't work.
Living in south Florida has taught me a lot, mostly through direct (and not very pleasant) experience.

Good luck, lived through a few when I lived out htere. Here in the Syracuse area we're not going to be getting much more than wind and rain unless something drastic happens, and yet everyone's freaking out cause "its going to hit during the FAIR!!!!" *sigh* I've got some extra batteries and the basics in case something knocks out the power, and otherwise not worried much about this particular storm!

(Besides, ask anyone who knows me - I *WAY* overprepared this year...)

All good points - I'll get to the gas station Saturday (everything else is covered).

Stock up on cleaning supplies. Often, in the aftermath of a hurricane there has been flooding and people need to clean everything that has been touched by flood waters.
Also, try buying a case of water and placing that in your freezer. It provides you with drinking water and bottles can be added or removed more easily than entire buckets.

Ruth: My first Labor Day in New York was the one where a windstorm knocked over part of a building and killed a vendor at the State Fair. So I can kind of understand the concern.

Jay: Don't forget to buy 8 gallons of milk and 12 loaves of bread. That's standard procedure when there's an EOTWAWKI forecast.

Sigh! Why is it that if a Cloud Farts anywhere between Norfolk, Va. and Portland Me. it's TEOTWAWKI? Of course, some of us would not mind a 12 foot Tidal Surge pushing up the Potomac, overriding Staten Island, and returning the Back Bay into Swamp Land.

BTW: Earthquakes are God's Way of saying "You are on Your Own." But I wonder how many of the Sheeple in the Megalopolis paid attention and stocked up on Emergency Stuff?

Getting leading edge of the rain bands in Northern Virginia. Having gone through Hurricane Andrew I can say is you're plan is spot on.
OK, more ammo is never out of line.
Gee, saving family from the attack of mac and cheese plus protecting them from 'caines. Bet Baby Girl G draws you wearing a cape.

I'll be riding this one out, moored to a dock in NY harbor. Other than laying out 6 extra mooring lines and praying no one gets loose and drifts into us.

Or, instead of getting prepared you can wait for .gov to come to your aid. And you can always loot and pillage while you're waiting.

Seriously, now that we're living back here in SW Louisiana, I need a hurricane plan of my own. It's been 25 years since I lived in hurricane country.

Dave H: Yah, missed that one myself, but have had lots of people bring it up in the last few days. To be extra fair I suppose the recent stage collapse in Indy isn't helping either.