I took Christine from (a)musings to the range for her very first time yesterday. It was supposed to be her and her husband, but he was feeling under the weather so she went solo. That's okay - it means we'll just have to reschedule another trip for him later. Darn it, more shooting... And then once more for each of their two kids. Gee, I'm all busted up about this, can't you tell? *g*

We started out with my standard safety lecture; we went over the four rules and why each rule is important; we familiarized her with the different firearms we'd be shooting; I went through my entire safety and gear spiel. I remembered to bring snap caps this time, and we practiced loading, chambering, and unloading a revolver and a semi-auto. We also ran through some firing exercises with the snap caps to get a feel for the trigger pull, etc.

Finished up with a quick overview of Weaver and Isosolece stances, body positioning, etc. Ran through how to line up the front and rear sights, how to position the front sight on the target, etc. I started off with paper plates as the target only - I explained that a lot of times, first time shooters will get discouraged if they don't hit the X ring every time. The paper plate eliminates that somewhat - people still want to hit the middle - by making the goal to get all shots on the paper plate rather than in a certain ring or level.

We started off the shootie goodness with the Smith & Wesson Model 17 in .22LR: 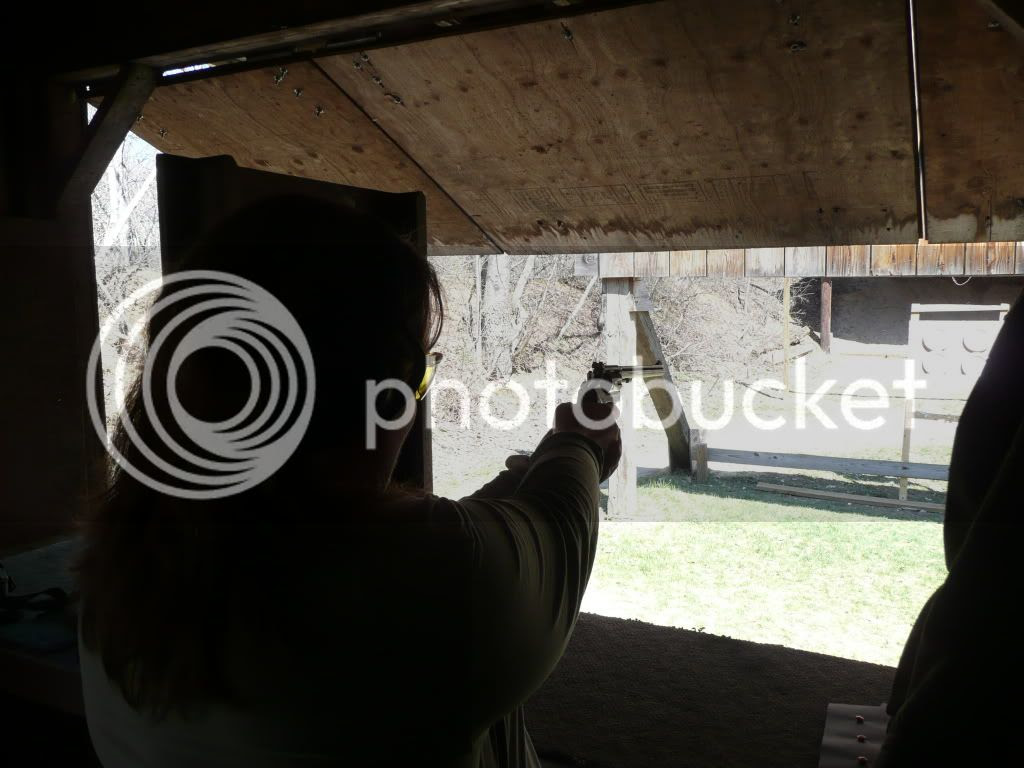 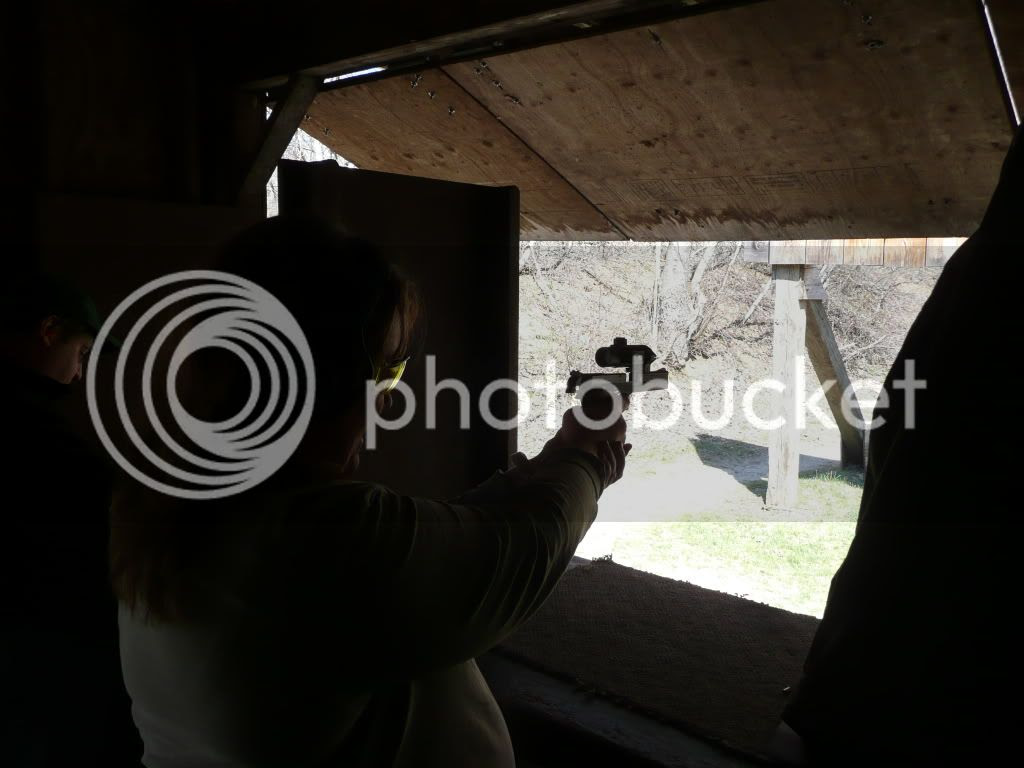 I managed to catch the 422 cycling, kinda neat shot. The red dot sight was a little tricky in full sunlight; additionally, the 422 was being pickier than usual with the Federal copper-plated ammo.

Next up, the Ruger Security Six with .38 Special: 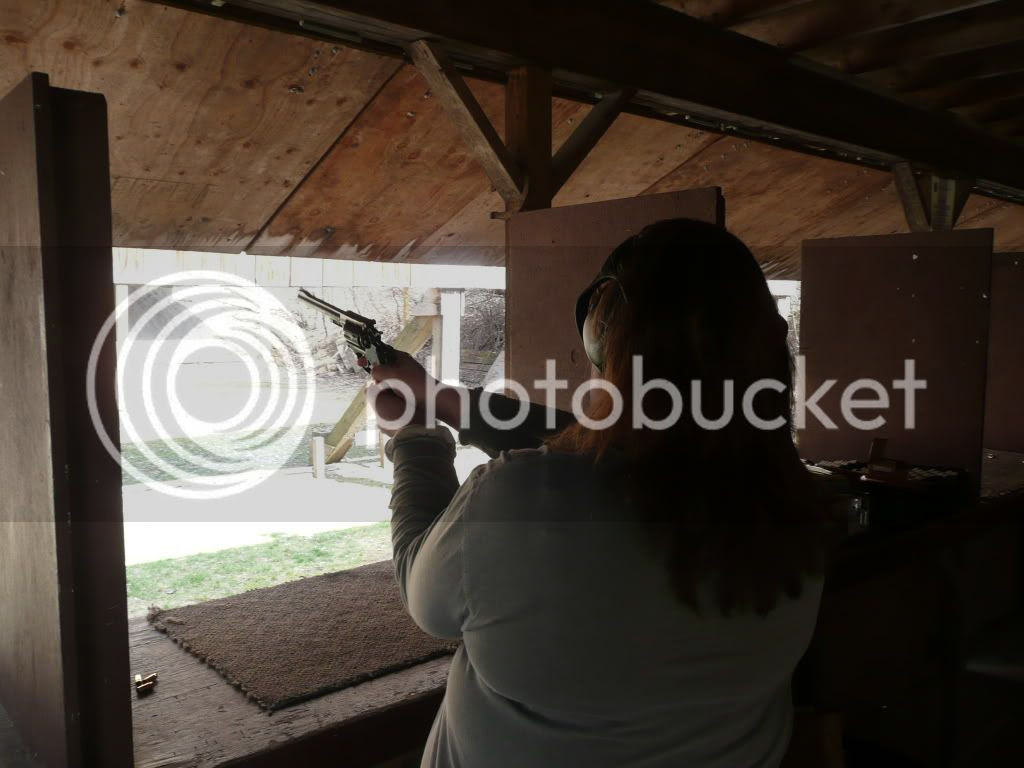 And the Browning Hi-Power in 9mm: 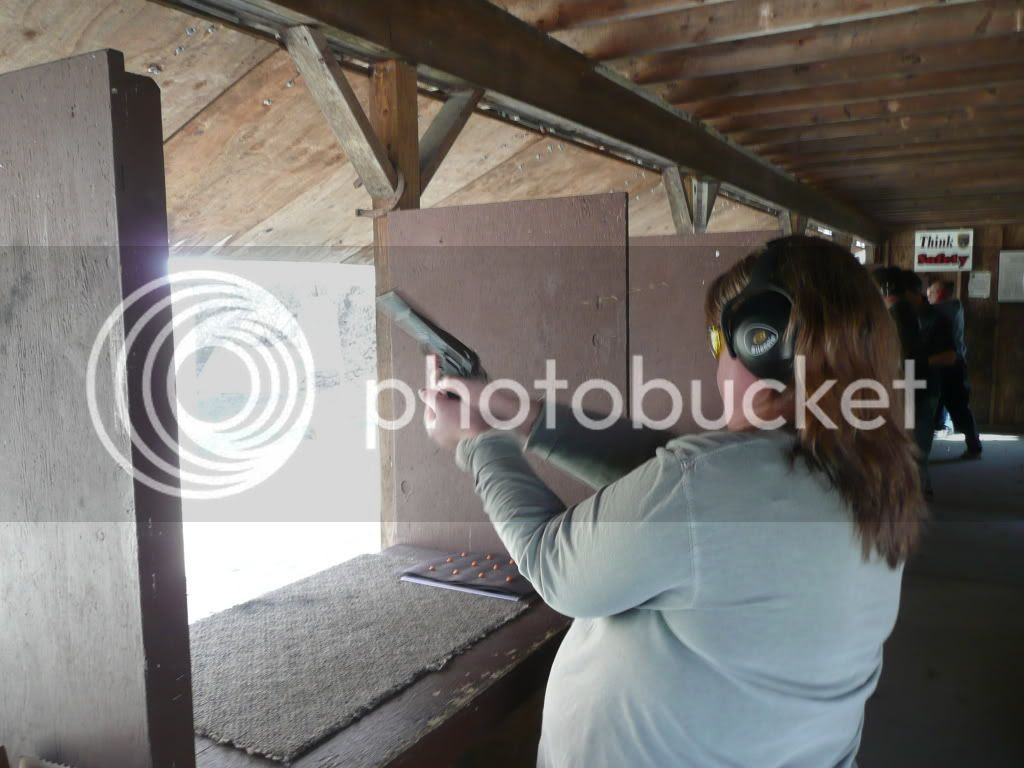 It seemed to me that the Hi-Power had a bit of a kick to it, which was odd, given that I've shot a much smaller, much lighter 9mm in the S&W model SW99c. The magazine disconnect has GOT to go...

After the pistol intro, it was time to break out the rifle. For the first outing, I opted for the Remington Model 572 in .22LR: 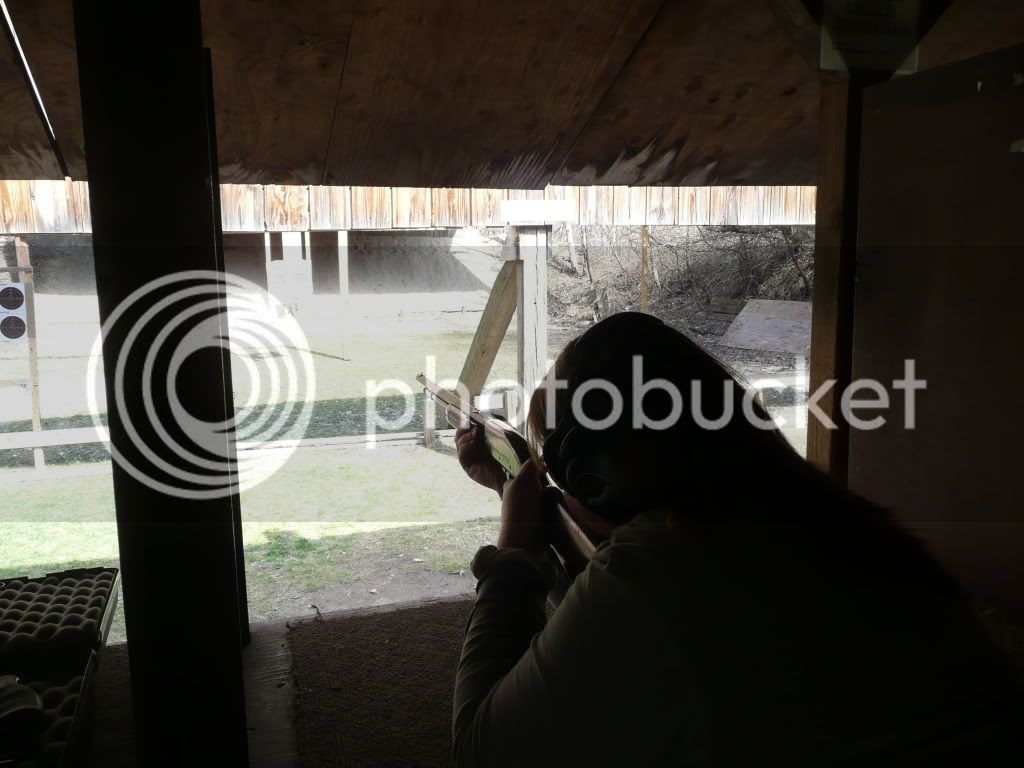 The Remington was, as I expected, a big hit. It's a LOT easier to score hits with a rifle than a pistol under pretty much any condition; a rimfire rifle with a short slight and a long sight radius is just more fun than should be legal (NOTE TO BRADYS: That's just an expression...)

The quote of the day came while she was shooting the Remington, actually. I was in the next lane over, prepping the next round of shooting, when I heard what can only be described as a shout of pure joy - she had put her very first round right through the "X" in the center. There's something to be said for the thrill of hitting a bullseye... 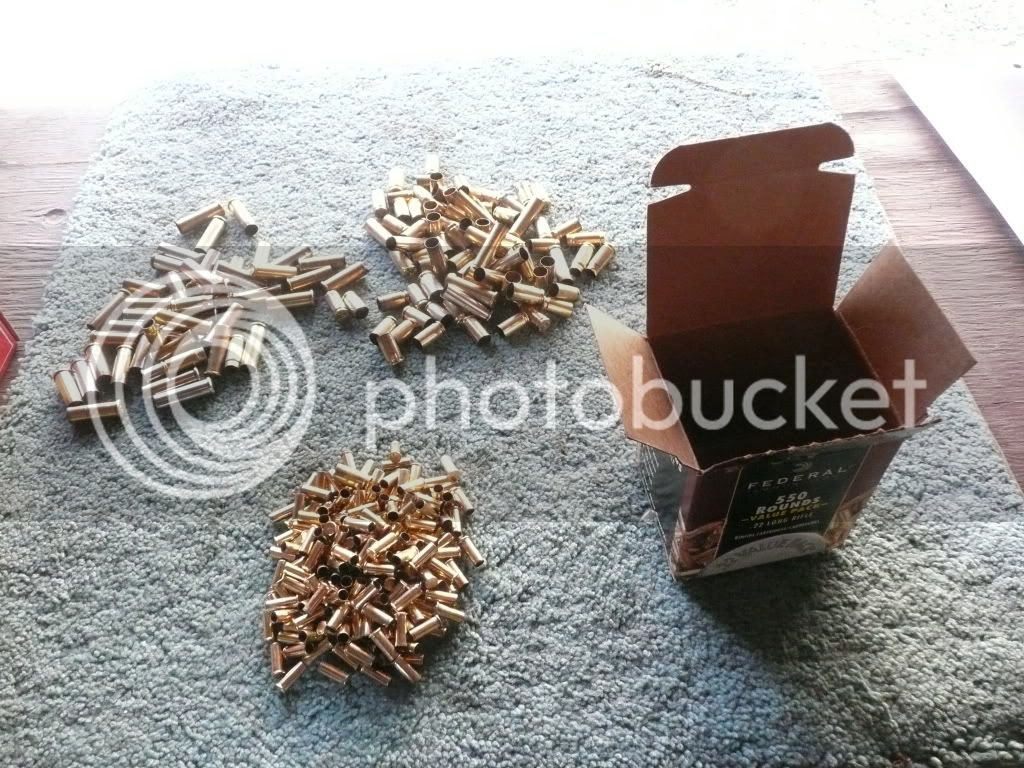 We shot up an entire box of Federal bulk .22LR. Not bad for three people - friend and commenter brad_in_ma and I had already scheduled a range trip today when Christine asked about going. I checked with both parties and all were amenable to sharing the trip. Brad was absolutely indispensable in that he provided a (much) less-than-gun geeky perspective on shooting - I highly recommend having a new(er) shooter help out with a brand new shooter to pick up things you might overlook.

And thanks Christine for asking to come shooting. She mentioned that it was one of the things to "cross of [her] list"; I hope it's more than that, of course; I hope that my tutelage made her first experience a positive one!

you left off that i told you i wanted to do this since high school. and before anyone asks, because i have been asked on FB and flickr, i am left eye dominant and right handed. so the rifle was literally impossible for me to shoot right handed and see the sights. so i switched and it was immediately comfortable.

i learned a lot yesterday -- especially how my son has problems with rifle shooting.

he's 12 and has done it 2 or 3 times, and can't hit someone as big as marlon brando standing 10 feet in front of him. he's got a visual/spacial disorder (ask to see what his handwriting on paper looks like). I think i know now exactly what to tell him, how to set it, what to look for. And he may possibly have to do what i did. he's left handed, but may be right eye dominant...so we'll switch sides and see if it clicks in his brain for him.

YAY!! Another chick with a gun! Thanks for doing all that that you do, JayG.

How come you didn't show her the Todd Jarrett Kung Fu gun grip? She's teacupping the .38 and the 9mm and that's why the recoil is so pronounced. Her accuracy would have improved too.

I'm so glad you had a good time.

That it might help diagnose your son's trouble with the rifle is even better!

We'll see if it helps when it's his turn - he may have less trouble with the pistols, since eye dominance is easier to correct with a handgun...

Thanks! I'm hoping that this year will see at least two more gun-chicks created - Mom G. wants to go, as does Sis G.

There's plenty of information for a new shooter to absorb just in the difference between semi-autos and revolvers; sight picture; sight radius; etc.

We can work on accuracy later. The first trip is to get the basics down - pick up the gun. Load it safely. Point it down range safely. Make it go boom safely.

When/if she'd like to go again, we can introduce more specifics to better shooting. For now, it's just a primer...

You are too kind referring to my presence as indespensible. Too kind, indeed. All I did was lay a second set of eyes on the scene. I have to admit it was a bit disconcerting to see another shooter a few lanes down from us racking the slide on his pistol while his finger was on the trigger. At least that fellow had the good sense to have his piece pointed downrange.

One further point of observation . . . where's the pic of you holding your token birthday present? Hmmmm? I bet inquiring minds want to know.

Why, it's waiting for my birthday, of course!

jay, you predicted correctly that i'd be called out for the cup and saucer hold. heh.

Just so everyone knows, i really was focused on getting used to doing this. I wasn't doing it for accuracy per se -- the just experiencing and knowing how this feels, the rise in caliber numbers etc... was very interesting for me. learning to control for accuracy will come.

all told, and this is what i'm most impressed with, is in looking at the plate and the target, for a first timer i think i rocked it and kicked its ass.

the recoil on that shot still resulted in me hitting in the black, very much towards the center. not spot on like with the rifle, but hey.

if it was me vs. goblin, to steal from jay's vernacular, it'd be a hurtin' goblin for sure.

Did she anything about recoil?

The pic with the BHP in full recoil looked uncomfortable.