With the kind assistance of Borepatch, we proudly present the Northeast Blogger MHI Patch: 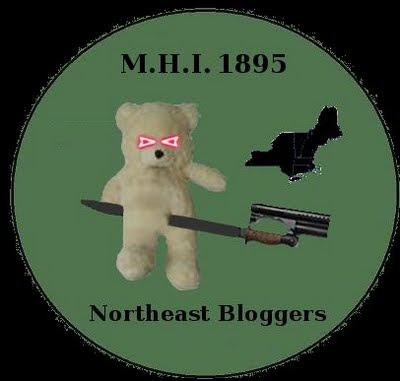 This patch, lovingly created by Borepatch (and thought up and tweaked by your humble host), has been submitted to the MHI Patch Contest Larry is running until the end of the month. At the close of the contest, he's going to have a contest on Facebook (you *have* friended Larry, right???) and the winner will receive the following prize:

The PRIZE: For whoever wins the poll, I’ll mention your patch in MHI:2 so it will become official cannon in the MHI universe and I’ll send you an autographed copy of Monster Hunter International. If your town is already represented by another team in the MHI universe I might have to tweak accordingly, so the geography of where it is from will have to be at my discretion.

Got that? A mention in MHI:2 (something tells me there won't be any other submissions from MA/NE, so I doubt tweaking would be needed...) Do you have any freaking idea how cool that would be? To have the bayonetted possessed teddy bear immortalized in print would be... well... quite possibly the most geekerifically cool thing I can think of...
Obviously, I will need to bus in the undead from Chicago to help rig this...
That is all.
Posted by Jay G at 3:00 PM

I would suggest changing the teddy bear to a Teddy Kennedy, but that would be in bad taste. Seriously, the current bear wont work well on a real patch. How about either a simple cartoonish bear, or a Pikachu with X'ed out eyes?

And I get the impression that you're slightly partial to this design...:)

I need to friend YOU before I will friend somebody I have never met...

The fact that it's a shotgun bayonet makes it even better!