MA Politics, the Media, and My Brush with the Candidate...

I mentioned going to the Winter Classic at Fenway on New Year's Day last week. The game itself was awesome; TheBoy and I had a GREAT time (despite Mother Nature's best attempts to freeze our innards); but for me, the highlight of the day was having this picture taken: 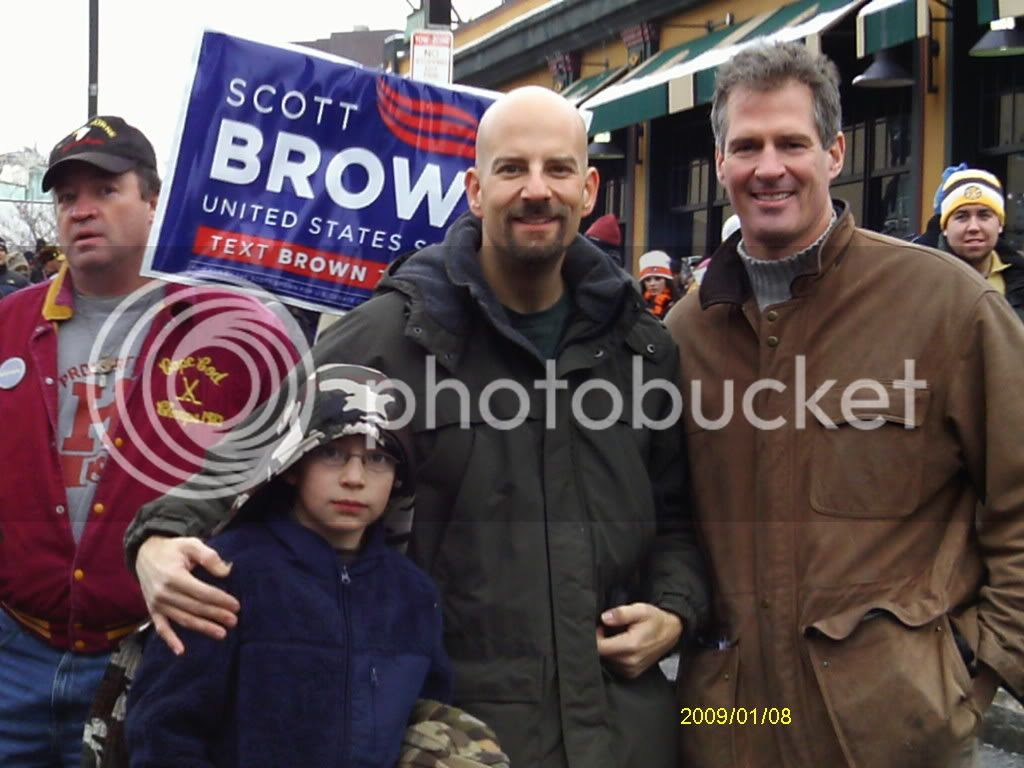 Hope I Don't Get Politics On Me!

That's me and TheBoy with MA Republican candidate for US Senator Scott Brown. I was also asked to give a statement as to why I supported Lt. Colonel Brown, and turned on my political/marketing charm and gave a couple quick bullet points about business as usual and not being represented. Brown is fighting a seriously uphill battle: He's trying to win Ted Kennedy's Senate seat against the MA District Attorney Martha Coakley. He's been all but ignored in the media, as these contests tend to be pretty lopsided in favor of the Democratic candidate - Kennedy and Kerry routinely defeat their GOP opponents more than 2 to 1.

And being shown with a shaved head biker gun nut probably isn't going to help him either... ;)

What was telling, though, was that Coakley and/or her supporters were nowhere to be found anywhere near Fenway on New Year's Day. This was a HUGE event, drawing a capacity crowd of nearly 40K people (and probably at least as many people either working the event, looking for tickets, or just in town for the occasion). There was a boatload of free media to be had, and Brown was in the thick of things, getting his picture taken, pressing the flesh, etc. I did not see a single Coakley supporter - they couldn't even be bothered to send a couple junior staffers to hold signs.

Even worse is the complete and utter media silence on this. Let's face it - that's a pretty damned arrogant maneuver. Coakley is so utterly convinced that she's got this contest in the bag that she knows she doesn't have to do anything; in fact, she's more than likely playing it safe - the less she does, the less she has to explain herself ("We discourage self-help", anyone?). And the media is right along for the ride - just like they covered for Dead Ted when he outright refused to debate his opponents in 2000. Coakley knows that the media's squarely on her side and in her pocket, and won't have to face any consequences for sitting it out and playing it safe.

And the worst part is, she's probably right...

Wonder what the reaction would've been if he had known you had a firearm license and were most likely carrying? - PhillipC

Can you imagine the boston GLobe, or any of the Boston network newsfolk asking Coaley:

"Would you vote for passage of the healthcare bill, knowing that it made its way to a vote on the floor only by having some of your fellow Democrat lawmakers bribed with hundreds of millions of taxpayer dollars and given exemptions for their home states, which will be paid for by taxpayers in the other 49 states?"

She'd probably call that a "gotcha" question, and refuse to dignify such a dirty tactic by responding to it.

Even the Boston Globe has noticed her disapearing act : http://www.boston.com/bostonglobe/editorial_opinion/editorials/articles/2009/12/16/the_debate_voters_deserve_coakley_vs_brown/