Today's Gun Pr0n comes to us courtesy of friend, commenter, and blogshoot and blogmeet dinner attendee Wally. It's yet another one of his wonderful toys, something I'm really hoping to get a chance to put through its paces at a later date. Are you ready for something awesome?

Get a load of this: 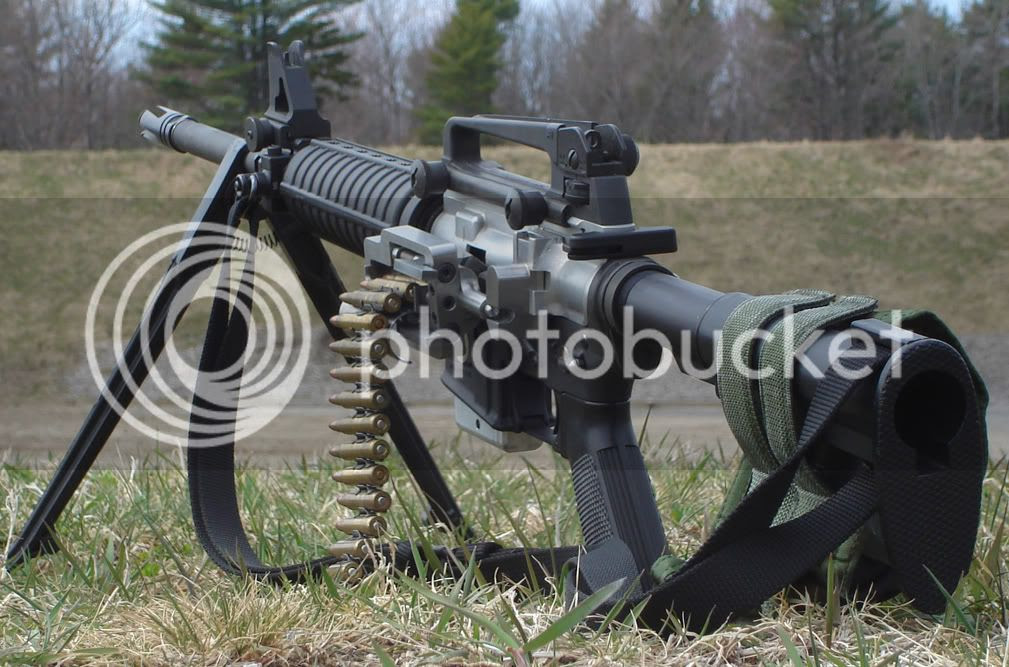 Yes. That is exactly what you think it is, only more so. It's not just a belt-fed AR-15, no. It's a fully automatic (legal, of course) belt-fed AR. And just because he was gracious enough to send two pics: 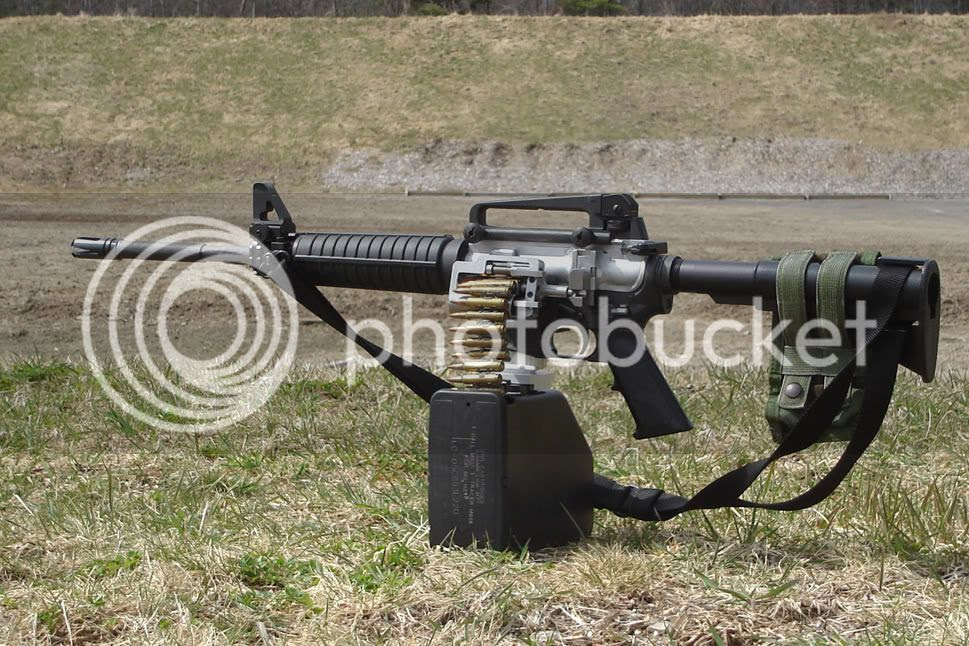 This gun transcends mere awesome. It takes awesome, establishes a whole new baseline, then turns it up to 11.

Here's Wally's description of it in his own words:

Are you soliciting BAG-day pr0n this year? If so I’d like to include my Build-a-gun day project. I am sorry to say that it will not be 100% complete by 4/15. However, in
its current state it looks almost exactly as it will when done - just in black, after anodizing and phosphate.

I had a goofy idea and decided to run with it. In the height of the gun rush, I had a new AR10T with no magazine and could not find one anywhere. Back in the day, Stoner built a few belt-fed AR10s and I figured why not replicate that. I elected to use a cheaper, more common, parts-actually-available AR15 as the basis for the build. Having a registered AR15 auto sear did not hurt that reasoning.

Anyway, I could ramble on for some time about many of the details – so skipping a few hundred hours of CAD and way more CNC time than I’d care to recall – a belt fed AR15 ! It will feed with standard SAW links from a loose belt or a 200-rd SAW box attached to the bottom. Remove the belt feed mechanism and it will happily feed from a standard AR magazine.

The upper receiver is modified AR, the lower and bolt carrier are stock with only a clearance cut added. Every other part in the gun is standard AR. Swap any part with
any of the zillions of aftermarket parts with no worries. No proprietary barrel, bolt, handguards, etc.

As it sits, the upper will be off for anodizing shortly. After that, test firing and tuning will continue. When everything is dialed in properly the feed mechanism’s parts will be phosphate treated, then that is the end of the build and the beginning of the “feed it” stage!

Teh awesome. We has it.

Every so often in life, a man sees something that makes him think, "Self, that might just be worth the felony conviction, just for one go-round with it..."

This is one of those things.

(WV: "myounn" - the sound that kids make when imitating the Doppler of a fast car going by.)

How about some more pictures and the story of making this? What machines were used? Looks great!

Nice piece and some DAMN NICE engineering in that one! :-) sigh...

He should be careful. There are several cases of the ATF deciding that belt fed AR15 uppers are NFA items in and of themselves.

How does belt feed make something an NFA item?

Guys I really appreciate the positive support, this has been many months (and many sleepless nights) in development!


Libertyman - I could go on for hours about it with a lot of details and side stories that I wouldn't want recorded in print anywhere :) At the next blogshoot, or dinner though, I'll happily prattle away.
Most of the work was done on a Fadal VMC40 and a few parts were hatched on a Monarch CBB 21"x78" lathe. Overkill is a way of life.

Zercool - you can borrow the beltfed but I'm afraid I know what you'd do with it. Clean it THOROUGLHY and please post the pic B^)

ParatrooperJJ - ATF has ruled that one particular belt fed upper is Title 1 (regular gun, not NFA) and that upper essentially a MG34 designed to use an AR lower as a FCG. Long discussion cut short, this is a completely different design - using an AR upper. The one I built has a similar system as has been built by Stoner and Colt - neither had any commercial success.

hey Wally, any thoughts to making more of these magnificent machines? or sharing the process that resulted in it? i've been dying for a BF M4, but ARES hasn't got their ball rolling, Valkyrie uses proprietary links and no one else seems interested in making that dream come true for the rest of us. what do you think?

hey Wally, any thoughts to making more of these magnificent machines? or sharing the process that resulted in it? i've been dying for a BF M4, but ARES hasn't got their ball rolling, Valkyrie uses proprietary links and no one else seems interested in making that dream come true for the rest of us. what do you think?