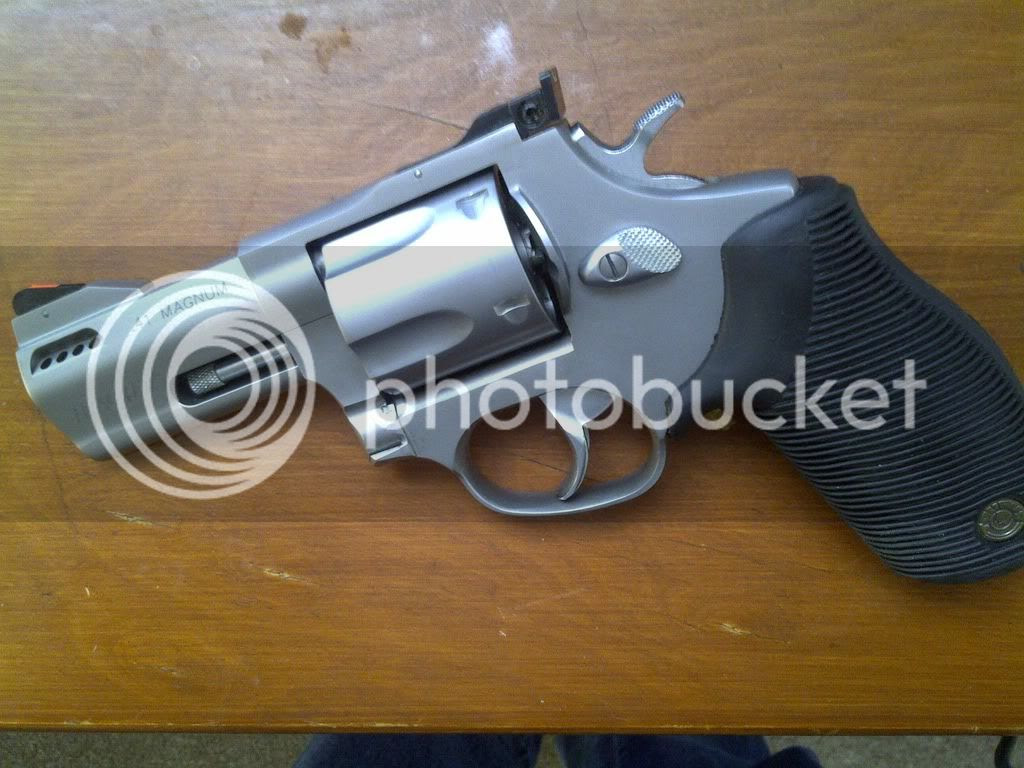 That's a Taurus Tracker in .41 Magnum with a 3" barrel, full ejector shroud, and adjustable sights. Not a bad lookin' wheelgun at all.

The .41 Magnum is one of those lovely oddball calibers; placed between the .357 Magnum and the .44 Magnum in terms of power, it should have caught on like gangbusters. While the .357 Magnum is no slouch in the power department, there's a uniquely American desire to have more, bigger, faster. The .44 Magnum hit the scene in 1955, and it was a little too much, too big, too fast for some; the .41 Magnum came along some 9 years later as a compromise between the nearly-30 year old .357 and the ten year old .44.

Poor bullet design, fewer options than either of the other two calibers, and a unique problem faced the .41 Magnum. If the .41 Magnum was loaded too hot, it was too close to the .44 Magnum and offered little incentive to stay away from the larger brother. Loaded too lightly, and the .357 Magnum proved more powerful. The .41 Magnum had fewer bullet weights available, and fewer bullet options, period, that restricted what could be loaded for this new caliber, and it never really caught on the way it was hoped.

It's still a great gun, and I hope Chad brings it to a bloggershoot so I can try it out... ;)

The .41 was developed as a better round for cops. Elmer Keith and Bill Jordan were instrumetntal in getting it produced.

Their theory was that a 210 grain bullet at moderate velocity would work better than the .38 Special (which Keith was quite unhappy with) and the .357 Magnum which they thought didn't work as well as it should.

As it happens the .40 S&W, which is used by lots of cops today, has ballistics very similar to the original Remington "Police Load."

I like the .41 Magnum and have a bunch of them. I've used them on bowling pins and steel plates with moderate lead SWC loads. Haven't hunted with mine yet but plan to. Just scoped a nickled six-inch M57 for that purpose.

When I was a younger my Grandpa and Grandma actually lived almost next door (as far as ranchers and farmers live next to each other) to Elmer Keith. My Grandpa was a good friend of Elmer and his wife. They would always come over at least once when our family came to visit. Dad no doubt told as many tales as the rest of them. :)

Just a note to clarify that the revolver in the photo is a 425 Tracker with adjustable sights and a three-inch barrel, sure enough.
The 415 is a fixed sight gun and does indeed have a shorter barrel.
I tried to find a three-inch Tracker for a carry gun but couldn't locate one. My local Big "R" store had the four-inch tracker in stock for $499.97, so I snagged it and haven't looked back!
The recoil with the porting--another thing that proves that's a Tracker in the photo, not the 415 which is unported--feels like my .357. I have a blued Smith Mountain Gun in .41 with a wooden grip that tears up the web of my hand. The ported Tracker with the "Ribber" grip is actually fun to shoot. It also hits right where I point it. I think this may be true love!
Best of shooting to you all,
Howard Shoemaker
South Whitley, IN