SCI-FI sends in his AAR:


- Breakfast at 8am with the Blogoradans. Lots of great stories and anticipation of the shooty goodness to come.
- About 10:30, we hit the range. The field is divided into pistol range, rifle range, skeet/shotgun range, and long-range rifle range. All RSOs and medical personnel are identified. First Aid packs are prominently placed, and the FarmFam pickup is the dedicated runner if someone needs to go for advanced help (did I mention we are out of cellphone range?). The safety rules are gone over again; the Four Rules are stated again (mostly because of the two children present, but we all agree they bear repeating). Anyone can declare "Cold Range;" no one can declare "Hot Range" without eyes-on approval from everyone at that range. No goofing around will be tolerated whatsoever.
- My home-defense gun is a 1911 .45, so I took FarmDad's XD compact .45 and went to the pistol range (RSO was FarmDad). First pass on the metal silhouettes produced a high number of metallic pings. Satisfied, I hustled over to the skeet/shotgun range (RSO and skeet thrower was Spear). 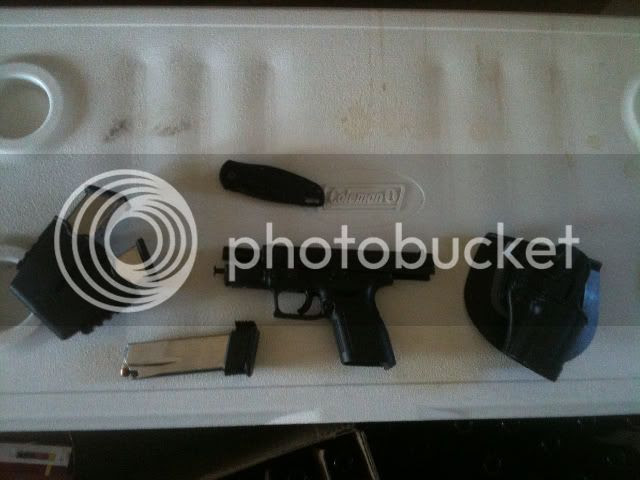 - The wind was ferocious all day, but on the skeet ridgeline, it was unrelenting. Many a skeet went back to the ground unharmed. Spear called it off after a half-hour, hoping to pick it up again after the wind died down. It never did. - Dejected at the loss of momentum when the skeet range was closed, I go back to pistols. Somehow, the bad mojo crept into my shooting. My next three mags of .45 go horribly awry. Hit rate drops to about 1 in 10. Grumble, grumble, grumble. - At about this time, I hear the first thunder from the long-range rifle range: aepilotJim's Barret M-82 detonates and makes all the kids whip their heads around to see what's going on. ZOMFG. MUST INVESTIGATE as soon as the crowd up there lessens. 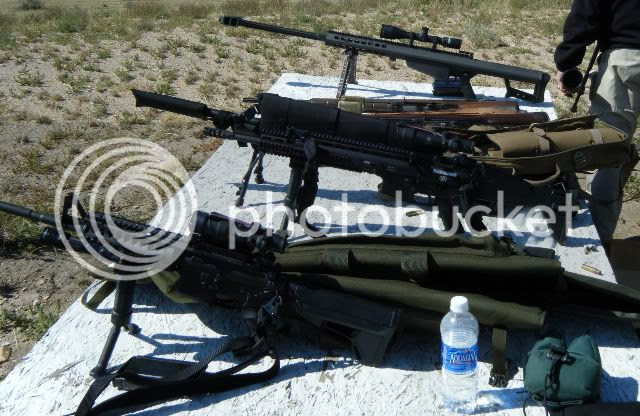 - I begin an unending loop of loading .45 ammo into three mags, emptying them all, helping reset the targets when the range is cold, and then reloading again. Reload, reload, reload. Sliced my thumb twice stuffing .45 ACP into FarmDad's XD. OldNFO caught me and my bleeding thumb and directed me to MattG's First Aid kit. I demurred -- it was a minor cut -- but OldNFO is a force of nature, and you don't turn down his instructions. Rather than directing me, he *takes me* to the First Aid kit, and with MattG's help, we clean and bandage the slice. - I make it up to the long-range rifle range to shoot the big stuff. AepilotJim's Barrett is first. It's amazing. Within 5 minutes, I am balancing and aiming a $10,000, 35-lb gun on a table, in ferocious wind, pulling the trigger and lighting off the equivalent of a quarter-stick of dynamite next to my cheek, throwing a $4 copper-jacketed steel penetrator at a 55-gallon drum 750 yards away. All of this is happening while I am surrounded by serious shooters, being spotted by Stingray. In short, this experience is both surreal and humbling. No one laughs when you miss, but you don't take it lightly, either. On my second shot, I hear Stingray announce, in that eternally calm deadpan of his: "Hit." OK. I can go to Valhalla now. - OldNFO also shared his awe-inspiring SCAR 17 in .308. It makes a wonderful "BOOM" in its own right, and I use it to pepper the dead car out at 375 yards. In all, I miss more than I hit, but not so far off the mark that I'm beyond training. Practice will make perfect. - I toddle back to the pistol range to practice more. I hit the steel disks, the popper tree, the metal silhouettes. From a new shooter's perspective, there is a great difference between using the metal silhouettes and the paper targets. With JayG and paper targets, I can see immediately how far off I am in any given shot. "An inch high, and an inch left," and so on. I can dial it in based on the previous shot. I found it harder with the metal targets. They gave a satisfying "ping" when hit, but it was harder to gauge how far I was missing. - After a particularly humbling round (READ: I MISSED EVERYTHING. DON'T JUDGE ME.), I turn to see FarmDad patiently watching and waiting. We then had the following exchange: FarmDad: "Having fun yet?" SCI-FI: "Yes. But the targets will die of old age before I hit them." FarmDad: "You up for some coaching?" This is like having a major league pitcher ask you if you'd like to learn how to throw a baseball. SCI-FI: "YES." He then proceeds to show me how to position my feet, shoulders, arms, and how to properly "lean" for shooting. For the rest of the time at the pistol range, I practiced the stance, with varying degrees of success. The "meat and potatoes" of this lesson, however, came later: 1) I watched Tam shoot, and her stance was virtually identical to what FarmDad had described; and 2) I saw photos that FarmDad took of me at the range (just before he offered some coaching) -- I was ramrod straight, almost tilting backwards, feet too narrowly placed. Even *I* as a novice could tell my stance was bad. - At some point, gunsmith extraordinaire Spear pulled out a homemade hand cannon, shown below in Jennifer's hands (of InJennifer'sHead). It's powered by black powder and Pure Awesome. 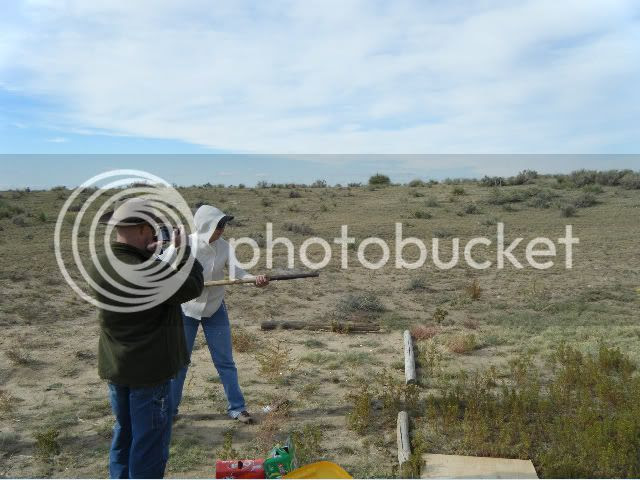 - Saturday night was the costume party: MrsSCI-FI came as an Occupy Wall Street hippy. A few folks came in steampunk-inspired costumes. aepilotJim came as Friar Badtouch. Salamander came as Wez from Road Warrior. (Not only did he have a red-tinted mohawk, his kneebeards were tinted red as well.) And introducing.... Stingray as The Humungus. At Blogorado, we have costumes for the cars, too. Remember FarmGirl's WarWagon? 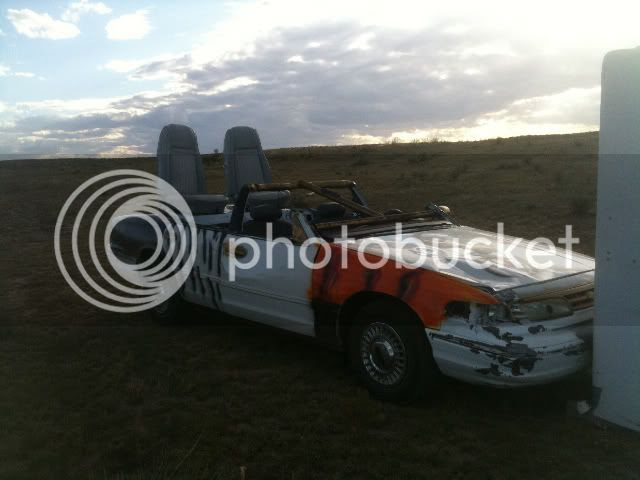 Some observations from someone who's BTDT: It can be intimidating to be surrounded by expert marksmen (and markswomen), some of whom have been shooting longer than you have been alive. I have never been in a group of shooters where they weren't ready, willing, and able to jump in and help you out - OldNFO gave me a few pointers on shotgunning at the Northeast Bloggershoot, frex; and I was thrilled to get the feedback. I get to shoot a shotgun maybe once a year at the most, and when I do it's usually at the bloggershoot, where I *might* get to run a tube through and that's it.

Shooting expertise, as many have said, is a fungible commodity. If you don't practice, it goes away - I can attest to that mightily, especially over the winter. If I'm really on top of things, I might get to the indoor range to shoot some 22LR a couple times a month when the weather gets cold - and that assumes the range isn't snowed in... Add in something with which you don't have a lot of experience - like shooting rifles long distance or close combat shotgunning - and it can really be overwhelming at how far behind everyone else you feel. And here's the rub: The only person that's going to notice - or care? Is you.

This settles it. Barring pestilence, famine, or death, I will be at Blogorado IV...
That is all.
Posted by Jay G at 6:00 AM

Heck Sci-fi, the first time I ever fired a pistol of the firearm type(IE: not a pelletgun/airsoft) I went straight into a weaver stance. Guess it helps to watch training videos and read gunnie blogs. ;)

I'd love to have some hands on training by the gunnie community though, however I'm thinking it'd be on the pricy side, transatlantic plane tickets don't come cheap.

Well, since they only have a limited number of spots, and since the Wife would kill me if I went out to Colorado and left her at home while I played 150 miles from her Siblings places in Steamboat Springs, I don't think I'll ever get there.

But you guys can crash at my place and save some Motel Money during your "Mission from God". But don't be surprised if a certain little "Celtic Warrior" who disguises herself as a Librarian sneaks into the back of the Van. ; )

Of course, since you'd be traveling into a Free State, and there might be some Shooting Goodness that is Banned in the VolksRepublik, you might want to take a little time and Stock Up.