So here's the meme. Long answers or short.

1. What was your first car? Model, year, color, condition?
2. What adventures did you have in it, good or bad?
3. What happened to it, what's the end of the story?

My first vehicle was a 1985 GMC S-15 Jimmy that I nicknamed "Lurch" (for how it handled). Looked a little like this: 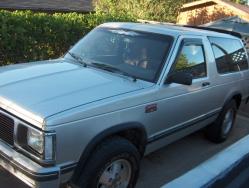 That looks to be a little newer, maybe early 1990s from the grill, but same idea. It was grey with dark grey interior, automatic transmission, four wheel drive, power windows. It had the 2.8L V6 motor - carburated, mind you - the same engine they put in the Cavalier! Oh, and it had a seven foot wide Fisher Plow on the front, too. Dad G. picked it up as a third vehicle right after I got my license, so technically it wasn't "mine", although I drove it 98% of the time - I figure it's close enough. It technically seated five, although I had as many as 11 in it on more than one occasion...

Adventures... Hoo, boy. I never killed anyone, so to the best of my knowledge the statute of limitations has expired on anything I may have done in this vehicle... One of the more memorable events happened on July 4th one year. A group of buddies and I had an annual thing where we'd road-trip up to New Hampshire (where fireworks are legal), drop a C-note or so on bottle rockets, roman candles, jumping jacks, M-80s, etc., and spend a good part of the rest of the day and evening trying to blow our digits off. We're driving back from NH with a car full of illegal fireworks, when someone starts tailgating us. You know where this is going, right?

Well, there's two guys sitting in the cargo area holding the bag. They goad me into popping the rear hatch with the push button in the glove box, at which point they both throw a lit brick of firecrackers out the back. The car that had been tailgating us locked up their brakes and went up on someone's lawn as several dozen firecrackers detonated underneath their oil pan. Good times, good times... We then proceeded to park down by the river and launch bottle rockets and roman candles at passing boaters - it looked a lot like the river scene from "Apocalypse Now"...

As for bad, well, that's easy: about a month after we got the Jimmy, I drove it into a brook. A mile from my high school. With a carload of friends behind me. I hit a smooth manhole cover, the front tires got on top of the water on the road, and I went straight as the road curved. I hit the guardrail that was supposed to keep vehicles out of the brook, it fell in instantly - years of erosion on the supports  - and in the drink I went. I was very fortunate in that a teacher was two cars behind me and stated for both the responding police officer - and my dad - that I was NOT speeding or driving recklessly.

What happened to it was that it was a product of an American car company in the 1980s. It was poorly made, with planned obsolescence built right in. At maybe 75K it started developing significant engine issues - and was starting to rot out, as well. The plow and plow frame accelerated the wear, of course; I used to make a lot of beer money plowing out folks around town as well as practically every house on the street. Oh, and the plow was really good for knocking trash barrels about 30 feet up someone's lawn...


So that's my first car - what was yours?

My first car was a '57 Buick Century, 4 door hard top. Pale green and white. Had 8 little mishaps with it and for my graduation present, my parents had it body worked and repainted one color, green. It was like a tank, drove home from my first job, pushing 2 feet of snow ahead of me like a plow. Nothing stopped that car. I traded it in on a Dodge and traded that in on a '65 Corvette. Dad didn't talk to me for 3 weeks. He got over it.

Yup, memories of good times. Thanks for playing, it's what I hoping for.

That was hardly big enough for a 7 Ft. plow, it's a wonder it moved at all.

Good: Insanely reliable in the sense that assuming there's fuel and battery power, it will start and go. Also, 27 mpg at 70 mph.

Bad: Glitches aplenty. My 'favorite' was when the vacuum assist for the brakes didn't work when the windshield wipers were on high. Plus, it eats tires in interestingly abnormal ways - like having two delaminate (aka tread comes off) in the span of a week. (I replaced all of them after that debacle.)

Bought a 1960 Triumph TR3-A for my first car at 15 years old. Wow! A proper British sports car. Lots of fun, I even drove it to Florida from Massachusetts, and most of the way back!

1985 Oldsmobile Delta 88. 5.0L V8 carburetor. It was an inherited car, as in it was my Grandpa's car (he bought new) and when he passed, my folks kept it. He passed in 90 and they were thinking ahead to 95 when I would get my license and need a car. I needed a car due to extracurricular activities and they were very tired of hauling my scrawny butt to all of them.

Not many adventures. Never wrecked, had some folks bump into it a few times. It was a land yacht after all. The bench seats were quite handy if you know what I mean.

Sold it to a lady that worked with my mom when I was "certain" that I was going to college out of state and needed a car that would last 4 years. That lady called it the best car that they ever owned and my folks saw it on the road every now and then until about '03.

Point of interest. When the weather got cold, the clock in the dash slowed down.

That was a good little car while it lasted.

Ah yes, 1969 Ford Country Squire LTD Wagon with the 429 High Output V8. 6 miles to the gallon and you'd get a chirp at 60 when passing gear kicked in.