Yes, even more pictures and commentary from the roving MArooned reporter SCI-FI...

We were wiped out from the night before... so breakfast got moved out to 9am.
The stories were greater, the tales of explosives and detcord were never ending. (Ask LawDog about the pecan orchard sometime. Or Independence Day, 1976.  Or...)
We got to the range later a bit later than planned, but Saturday's horrific wind had finally died down.
- I was determined to do long-range rifle practice this time.  This was just as well, because I couldn't find any .45 ammo at the pistol range.  How many rounds of .45 ammo did I fire on Saturday? Uh, all of them, I think.  I fired the .45 ammo we got at WalMart. I fired FarmDad's good ammo.  I would have fired a cat-turd if it were .45 caliber. I practiced, practiced, practiced until my fingers bled. (Literally.)
- AepilotJim, OldNFO, LawDog, and Spear were setting up the Table of Wonderful Toys again. I helped unload gear and set up rifles. - I got a chance to be a spotter. I tried to learn the terminology, to respond appropriately after a shot: "12 o'clock, about three feet too high,"  and so on. There's a certain economy of speech as a spotter, so your shooter knows how to reset for his next shot quickly and efficiently.

- OldNFO's sniper rifle (far left in that picture; I forgot the make/model): All others were calling out incredibly precise targets on the dead car at 375 yards: "I'm aiming for that bird-turd on the B-pillar."  "I'm aiming for that fly resting on the steering wheel."  I step up and LawDog asks: "What are you aiming for?"

I arch eyebrows and state; "The car."  The seasoned pros break out laughing. A moment's self-deprecation, for all to enjoy.  At this point, I'll be happy if I hit the planet the car is sitting on. LawDog patiently calls out my hits and misses.  Of all the rifles, I think this was the hardest for me to master.

- aepilotJim's M-1 Garand: standing, firing offhand, I'd say I was terrible, but aepilotJim was a polite spotter.  I aim for the metal target at 300 yards.  "Miss, 10 feet right." "Miss, 10 feet left. Split the difference and you're right on him." "Dead on, but too low." "Dead on, but too high."  Freehanding a Garand is not likely to get me into sniper school, but the final "PING!" of the clip ejecting was a wonderful thing. "You've just heard the Ping of Freedom," aepilotJim says proudly.  He's exceptionally generous at sharing his collection.

- When we rented our car on Thursday, the womenfolk with whom I was traveling found a minivan and began loading.  I, being male and practical, insisted on the quad-cab Chevy Silverado; we were going to be offroad and carrying a buttload of gear, after all..  They, being stubborn hens, loaded the minivan and hopped aboard. We argued bitterly over this for about two minutes.  In short, I would have to physically carry them to the pickup truck. Fine. On Sunday, an odd thing happened.  When I broke for lunch, I sat in the driver's seat to chat with MrsSCI-FI and Christina_LMT.  Throughout lunchtime, most of the womenfolk at the range stopped by the minivan, stopping to gab, eat, coo, preen, and whatnot.  Covered in dirt, sweat, and gunshot residue, I got a bevy of beauties with whom to eat. Phlegmmy suggested I rename the minivan "Milkshake," and we sang "My milkshake brings all the girls to the yard."  Before it was over, at least four different women mentioned that they thought I had a nice arse when I was at the pistol range on Saturday.  All of this helps balance out not getting the pickup truck.

- Immediately after lunch, The Humungus returned, this time, atop his throne on FarmGirl's WarWagon.  She drove him to the pistol range, wherein he performed a drive-by, firing his .44 Magnum Super Blackhawk and killing innocent metal silhouettes. Many pictures were taken, many videos were made, but LabRat reiterated her embargo: "Publish them and you will die."

- After lunch, MattG was proudly shooting his Winchester 30-30, tagging the dead car again and again.  Once done, he offered me a chance to take it for a spin.  He showed me how to load it, rack it, and fire it.  I stood and fired offhand at the dead car, and MattG spotted for me.  Of all the rifles, freehand or table, I was most accurate on this.  Interesting note, here: Evyl Robot was firing his pistol beside us, and at one point, MattG noted that even though Evyl Robot fired before me, my bullet hit first. "That's an example of how much more energy you have in a rifle round than in a pistol round," MattG explains. 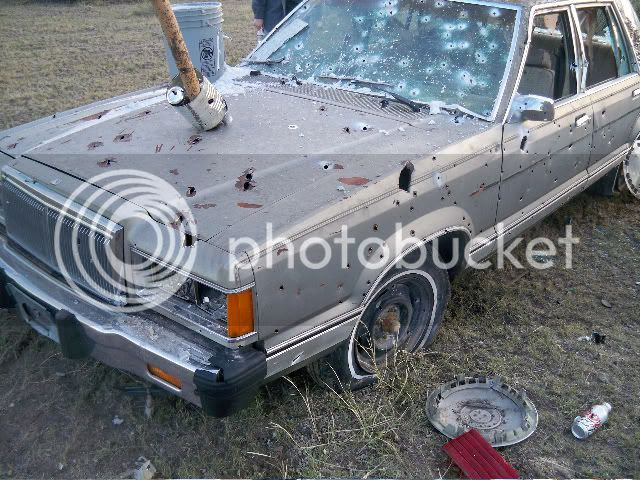 That car is dead, Jim
(Photo courtesy of Tam.)

- I took a break from the long range rifles to take photos and watch my wife shoot.  FarmDad was coaching her on shooting Jennifer's FNP .45.  (Side note: That gun is the size of a toaster-oven, yet Jennifer carries it concealed in the small of her back.  This is a testimony to Evyl Robot's skill at making IWB holsters, and God's skill at making Jennifer.)  This immediately brings to mind the all-important question: Where the heck did they find more .45 ammo? I thought I used it all? I hustle over and admire Jennifer's toaster-oven, and she hands it off to me.  (Evyl Robot and Jennifer have an Uplula magazine loader, for which my split thumb is eternally grateful.) I load it with the last of the .45 ammo (FOR RLZ this time), and go to town. Yee-haw, that gun rocks.  I won't ever get to see one in the state of Massachusetts, so the toaster-oven and I are mere ships passing in the night. Jennifer also gives me her 8-shot .357 revolver to shoot.  Again, it's a massive gun, yet she works it like ballet. 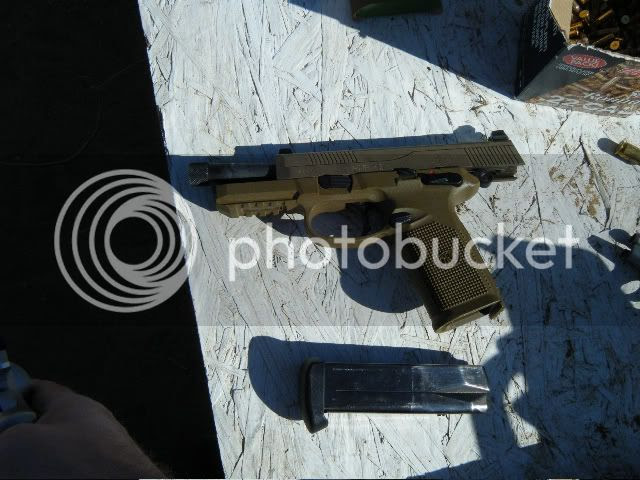 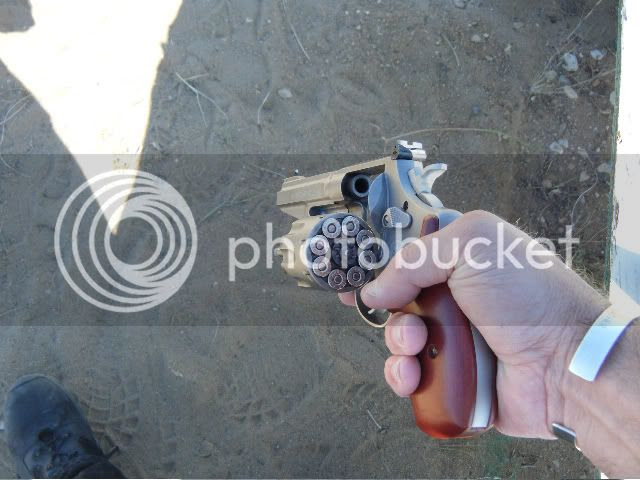 - Satisfied that I have now consumed every single round of .45 in the state, I moseyed back to the long-range rifles.  Early in the day, during setup, LawDog and OldNFO had a friendly wager on who could shoot the flashlight off the coffee cup perched atop the dead car.  OldNFO finally came to collect.  With me spotting, he not only blew the coffee cup out from under the flashlight, but two shots later, he sent the flashlight spiraling off into low earth orbit.

- While wandering between ranges and taking pictures, I stopped to discuss carrying options with FarmDad.  He has me take off the external holster and he hands me a hard plastic IWB holster.  We discuss positions for the firearm around my backside and appropriate sized firearms to avoid 'printing.'  Blogorado is truly one-stop-shopping for advice and test-driving firearms. Do you want a .22? See Tam, she has an armload to let you try.  Do you want some practice with an AR clone? See LabRat and Stingray at the rifle table.  Do you want a .45? Well, I used all the ammo up, but you get the idea...

- Around 4:30, Christina_LMT called me to join the Great Prairie Dog Hunt.  While I didn't do so good Friday night, surely this would be better.  Ambulance Driver generously handed me his Bushmaster XM15 and 40 rounds of ammo, and a-hunting we all went.  It is only by walking these fields that I got to truly appreciate the conditions of Colorado this year: desiccated, dried, scorched, and eaten down to the roots.  What the droughts didn't kill, the prairie dogs surely did.  This isn't some stereotypical "rednecks hunting harmless critters" event as parodied by Hollywood -- these are pests in extreme overdrive. We get to practice shooting on live targets, but the ones we don't shoot will be eradicated by other means.  It truly is "Us versus Them."  A farmer gets a 6% return on his investment at best; the more of his crop and cattle he can bring to market, the better a percentage he can eke out of the land.  This isn't a Yuppie making a six-figure salary on Wall Street, nor a smelly hippy protesting Wall Street while living off Mommy and Daddy.  This is where the rubber meets the road... and where our food comes from.  As for the prairie dogs.... well, they breathed a sigh of relief when I left the field of battle.  All that thunder and I didn't kill a one.

- Dinner that night was FarmMom's pot roast, Jennifer's hand-made lumpia, and real tamales made by a tiny Mexican woman and purchased by aepilotJim.  I was warned early on that I would be restricted to two (2) lumpia.  I ate seven (7) lumpia, and I would have shivved a child if necessary to get more.

I can't tell which part I would have liked better - shooting the car at distance, or hunting prairie dogs. I know I've got some serious repressed varmint hostility to work through given the groundhogs around here, so that part  appeals. I've never shot up a car before, though - I missed the Escort at Northcoast this past Labor Day - and that's fun. And, also, I've never shot further than 200 yards - and that was only one time!


The Mrs. has officially been put on notice: I will be attending next year's Blogorado...

Um, I thought it was "your milkshake brings all the girls to the caaah"

at least, that's how I always think about it.