Wow. Just wow. This is rather stunning, really... 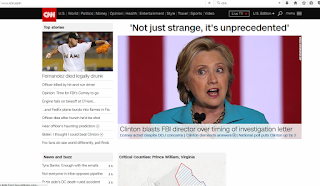 Screenshot because, well, you know...

This is the CNN main webpage as of about 6:30 Saturday evening. The story about the FBI re-opening the Clinton case is framed as "strange" and "unprecedented", with a bonus story calling for the FBI to ditch Comey. At the bottom of the page is a graphic showing, allegedly, how a (formerly) right-leaning area is now trending left, and how that portends abject failure for Trump and the Republicans.

We're still hearing dribs and drabs about the circumstances that caused Comey to re-open the investigation. From the sounds of it, disgraced NY congresscritter Anthony Weiner, recently estranged from Clinton's closest advisor Huma Abedin, had documents that pertained to the FBI investigation closed in July on a computer that was under investigation for an unrelated matter. "Tens of thousands" of e-mails dealing with Clinton - which we have to wonder how many were classified - wound up on a completely unrelated device, with unknown security.

That, Madame DeFarge, is "strange" and "unprecedented."
The media is actively working with the Clinton campaign to get her elected. How hard will they work to investigate wrongdoing on her behalf once she's in power? We saw the media perform more actual "journalism" "investigating" Melania Trump's speech as it pertained to speeches given by Michelle Obama than we've seen in the entire eight years of Obama's presidency. Imagine that. The media acting in a critical manner and doing investigative journalism. Compare and contrast that to the ridiculous lengths they're going through to cover for Hillary Clinton.

I want an adversarial press, not a supplicant one - Vote Trump.

It's unprecidented because the level of corruption in the dem party, particularly the Clintons, is unprecidented. Tamminy Hall and Watergate are teeny compared to this.

Somewhere in the hereafter, Nixon is laughing his ass off.

I think the National Enquirer has done a better job of investigative journalism.

Do they have any idea what they're in for once WE accept THEIR attitude toward the Rule of Law?

Welcome back! I heard Weiner was given the 'option' of death by heart attack, car accident or bullet...

So I'm guessing that this laptop was where Huma was storing her "backup copies " of all the emails as her " get out of jail card". The problem is that it would only work that way if she could hold thier discloser as a threat to Hillary. ...... and that's a very dangerous game.

There was crying at work tonight.. So, no bais at all....