Can Someone Set The Record Straight? 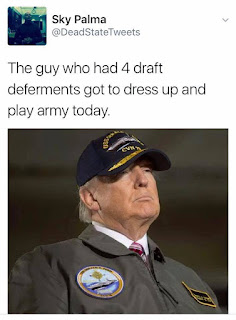 Now, leaving aside that the hat and jacket are from a Navy ship (clearly visible on the hat), I'm confused. We just had eight years where the president had never served a day in the military, so I thought we'd finally put to rest the served/didn't serve question.

In 1992, we had WWII war hero George H.W. Bush against draft-dodging Bill Clinton. Military service? We were told it didn't matter.

2000? George W. Bush (accused by the left of dodging the draft despite serving in the TX Air National Guard) against Al Gore Jr., who served honorably in Vietnam. Military service? Now means everything.

2008? Barack Obama, never served, against John McCain. 5 years in the Hanoi Hilton? Yeah, he served honorably. Military service? Not only does it not matter, it wasn't even brought up.

So... Now military service matters again? Interesting that it's brought up after the election, given that Hillary Clinton not only didn't serve, but by being female, she didn't even have to worry about the draft.Or, is it possible that there are only certain times and circumstances that military service means anything? Like, say, depending on the political affiliation of the person in question.

I mean, not that our media would ever show bias or anything like that, of course...

If liberals didn't have hypocracy and lies they'd have to be quiet. Which is a condition I fervently wish for.

For the sake of argument, let's say the allegation is straight up true.

So, the electoral decision in December was between:

A) A draft dodger with 4 deferments who has since gone out of their way to honor those with military service (and, hypothetically, if he were elected President, would ditch the White House press corps to go to Andrews AFB to be on hand for the return of a KIA serviceman) - OR -

B) Someone who never served, wasn't eligible to be drafted, but was of such <SARCASM>high class</SARCASM> that she taught her daughter to refer to cops, Secret Service, etc as "pigs" and generally treated anyone in uniform with undisguided contempt as First Lady - OR -

C) The dope smokin' libertarian dude with a principled anti-war stance, but the highlight of his party's convention was the rejected-by-Chippendales not-quite-the-full-monty act - OR -

D) Whatzerface from the party between blue and yellow.

Well, that pretty well brings the Military Appreciation Derby down to Beetlebomb with mane whipping in the wind and Where's Allepo just behind and coming around the bend, twenty lengths behind, is the Broken Old Nag with Rainbow Warrior dead at the starting gate. And the winner iiiiiiiiiiiiiiiissss.... BEETLEBOMB.

It never matters until, in their minds, it's a deal breaker... Sigh...

As far as I can tell, the current crop of dims don't have any values at all, which makes it easy for them to be flexible in issues like this one.

Kerry served honorably? Not according to those he served with.

GWB is on record as requesting transfer to a unit that was flying in SE Asia, but he didn't have the required hours in his rated aircraft. IIRC, they turned down a request for a variance on that.
They withdrew the aircraft from duty in that area before he attained enough hours to qualify for that duty.

That fighter jet he was flying is still rated as the most hazardous Air Force plane to fly.