I've been hinting at today's gun pr0n all week long - veiled allusions to changes made to my AR-15, pictures of new additions taken out of context, etc. I've been changing some parts on my Bushmaster XM15-E2S carbine to suit my needs (and because it looks cool), and figured it was time to unveil it. First off, we'll start with what the Bushmaster looked like when I got it: 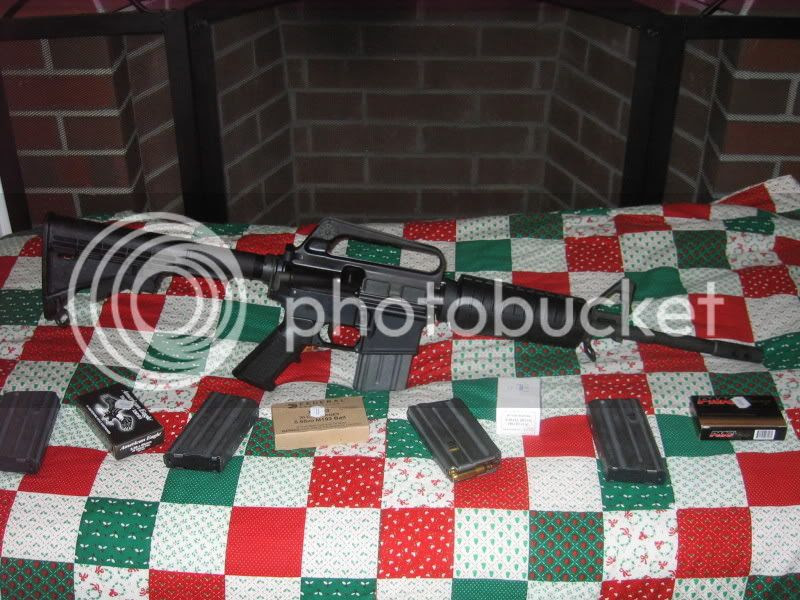 (Hey, I got it two weeks before Christmas...)

It's a pretty standard carbine configuration; a collapsible stock (pinned to comply with MA AWB); 16.25" barrel, shortened handguard; and standard carry handle. The pinned stock always grated at me - it would be very handy to actually be able to use that collapsing stock for new shooters and such - and I wanted to be able to add optics/red dot or holographic sights and a pistol grip forend.

With that in mind, here's what it looks like now: 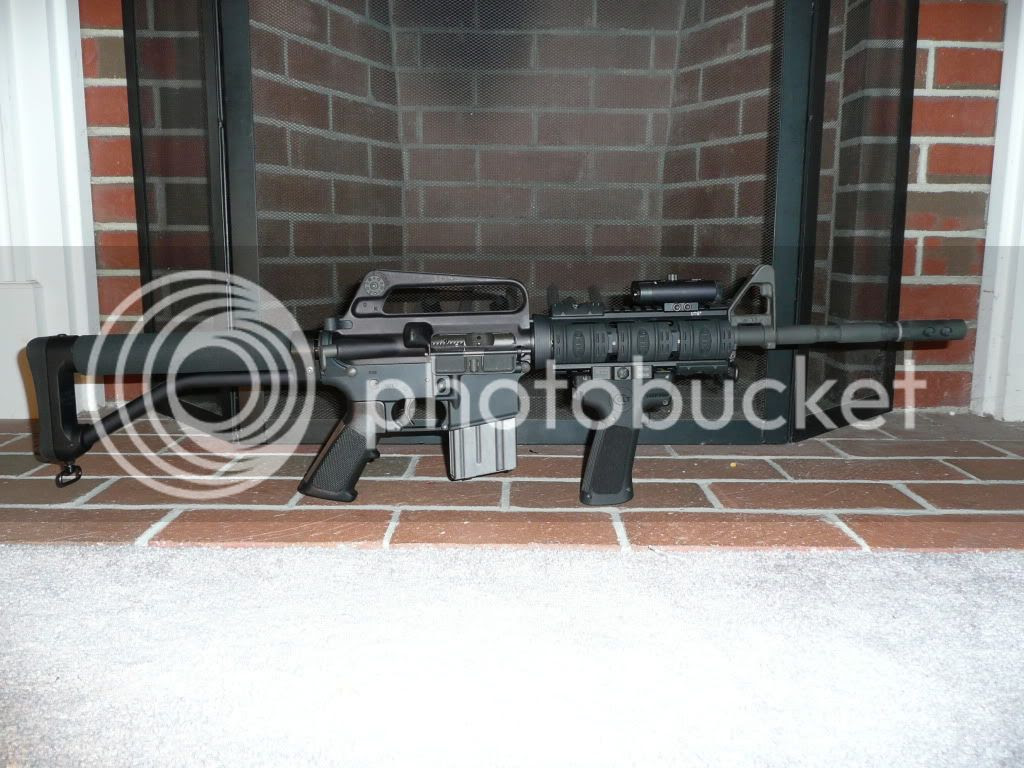 It now sports an ACE skeleton rifle stock in place of the pinned collapsible stock and a UTG quad rail handguard in place of the standard carbine handguard. The UTG quad rail has a LaserLyte Kryptonyte Gunsight K-15 green carbine laser on top and the aforementioned LaserMax Colt CGL foregrip laser underneath. I was tempted to stick on one of the LaserLyte pistol bayonets in front of the foregrip just so it would have a bayonet, but it slipped my mind...

I'd like to swap out the pistol grip itself to something a little more ergonomic; perhaps a scout-type scope to mount off the handguard (or just the illuminated scope kindly gifted to me last year by AD); definitely a sling (any thoughts?). The only other "big ticket" item I might consider adding on would be a high intensity weapon light - like the Surefire Scout Light - off the side rail for complete target illumination (note to SureFire: We'd be happy to review any and all weapon-mounted lights here at MArooned - we can accomodate pistol rail lights, shotgun lights, or AR-15 lights...)

What other must-have accessories should I be thinking about?

Darn it! Stop that! You are making me want one....

For slings, I like the Viking Tactics 2-point sling, but it's expensive.

I've thought about trying the cheap route with some paracord and a GI 2qt canteen strap.

It's all pretty useless without at least several THOUSAND rounds of ammo. It would ostensibly be for the impending zombie apocolypse.

The ERGO ambi grips are my goto item after trying MagPul's MIAD, a Hogue and a TangoDown. Works like a grip should and is cheaper than the competition.

I'm still looking for the perfect sling myself. I first thought single points were it. But now I realize having both hands available while the weapon is slug would be a good thing. I'm now saving my mini-bux for a Viking Tactics two point. And I have to work out the forward side mount issue on my standard hand guard equipped carbines.

Wow, that looks great. Is that a rifle-length skeleton stock ?

I never wanted an AR, interestingly enough. It was only the pending Barackalypse that got me to pick one up. I'm astounded at how much its grown on me in the past year...

Thanks for the recommendation; it's definitely something I'll look into down the road (I'll probably get something on the cheap side to tide me over for now)

Given that Four Seasons was selling 1,000 rounds loose for close to $400, that ain't gonna happen any time soon...

That's the third or fourth recomendation I've seen for the ERGO pistol grip. I think I'll order one from Midway in my next order and try it out...

Yes it is. That's the 9,9" (13" LoP) skeleton stock. Installing was relatively straightforward; really, the hardest part was getting the foam on...

Jay, was the previous stock a collabsable tube? I think you'd need to swap the buffer and spring for rifle units if going to the long stock. Although you may have, in shich case it still looks really slick.

Up in the air between that skeleton and a Choate E2 for my next build.

Jay: send me an email (baca.strings@gmail.com) with your shipping addy. I have a carry handle mount scout rail you can have...

Jay, I would suggest a carry-handle mount as Strings offered, vs. any sighting system mounted to that railed handguard. I'm sure it SEEMS solid, but only a small movement in a scope mounting system will put your next shots into the middle of the neighboring county.

Actually, the same goes for the laser(s), although if they are ONLY used for big/close range targets, then a small POI shift won't matter much on an intended torso shot. Try zeroing them precisely, then shooting a few groups at 25 yards with forward pressure on the vertical grip, rearward pressure, etc. Then finish it off with shoot one, wiggle the vertical grip side-to-side, shoot a second shot, wiggle the grip, etc., and see what the group looks like.