I took my #1 blogson to the range yesterday for a day of "hooky" - because of the way floating holidays work at my job, and Christmas and the Fourth of July falling on weekends, we had an extra holiday that they chose to give us yesterday. I took the opportunity to have a "Man Day":
Previous outings have left a question as to my handgun shooting prowess, so I guess I had a little something to prove this outing. I set up a silhouette target and ran the LaserLyte and LaserMax sights on my P226 through their paces (both sets are still right on target, although they're both probably in need of new batteries). I even managed to pick up the laser dot at the 75 foot berm, and broke some clays and clanged the 4" steel spinner with the P226!

But this was the day's crowning achievement: 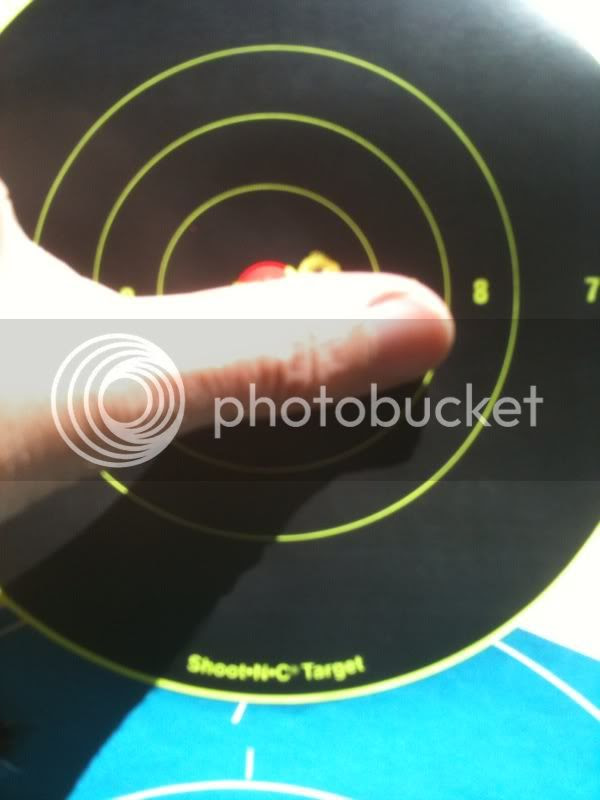 Oh, wait, you can't see that with Borepatch's thumb covering it, can you? Silly me. Here it is: 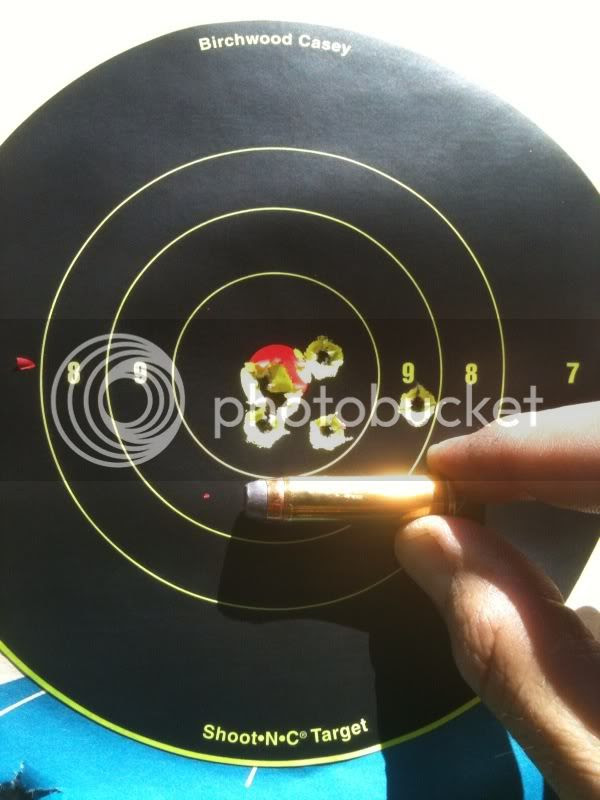 That's an 8" Peel 'n' Stick target at 25 feet, shot with a Smith & Wesson Model 17 .22LR revolver, rapid fire single action. Take out the "flyer" and the group is less than ¾" across; even with the "errant" shot in the 9 ring it's still an inch and a half (the .357 Magnum cartridge is 1.6" IIRC). Shooting was offhand, fired as quickly as I could cock the hammer and pull the trigger.

What does this tell me? It tells me that it's not the gun, nor my innate shooting ability that's the issue with centerfire shooting. I'm obviously anticipating recoil and flinching, combined with "stabbing" at the trigger rather than a smooth pull. When I'm shooting .22LR, there's a dramatic improvement in accuracy; additionally when I'm firing a centerfire revolver vs. semi-auto my accuracy is better.

It also tells me that I need to get to the range more often - interestingly enough, the more I shoot, the less I flinch and the better I shoot overall. Go figure.

You got a flier, there, in the nine ring. Keep at it. One day you'll be good.

Seriously! One day I hope to be as good as JayG.

I would have posted my targets, but shudder to think what T-Bolt would say.

But it was some mighty fancy shooting on Jay's part there.

And thank you for a fabulous time at the range, Jay!

"When I'm shooting .22LR, there's a dramatic improvement in accuracy; additionally when I'm firing a centerfire revolver vs. semi-auto my accuracy is better."

Jay, there are reasons for this that may or not be related to technique.

1. You said you were shooting SA, which means a very light trigger pull. Generally, the lighter the trigger the more accurate one can shoot that gun.

2. .22 revolvers are dead nuts accurate at distance with the right ammo. Especially with a 6" or longer barrel. Take that back, .22 is generally more accurate than centerfire out of pistols. In Bullseye the .22 scores are generally higher than .45 for most competitors..maybe due to recoil being less but also the guns tend to be very accurate.

3. Revolvers generally, with the right load, are more accurate than semi-autos. On revolvers the sights are fixed in place relative to the barrel, shot-to-shot. On almost all semis, the slide will never reset 100% perfect relative to the barrel on each cycling. Bullseye shooters pay a $1000 premium over a regular 1911 to tighten the fit so the slide resets to the barrel consistently. At close range this is not an issue, but start reaching out to 25 and 50 yards and it shows up. Also, revolvers, imho tend to come factory with sights more suited to target shooting as opposed to tactical configurations on semi-autos.

As for technique, it may not be flinching. You stated you were shooting rapid fire. It is quite common we see Bullseye shooters shoot better in the rapid fire stage than slow fire. Reason? They are just pulling the trigger and not thinking about it. Let your subconscious pull the trigger and it will do so perfectly. Consciously pull it and it's never as good.

Otherwise that was great shooting so get yourself to a local Bullseye match, we need more shooters!

There's a solution to not getting to the range often enough, and better yet, it's free. Dry fire is your friend. Since I started semi-regular dry practice, my IDPA scores have improved greatly. 10-15 minutes of dry fire every day is much better than a few hours of live fire every other weekend, skill development wise.